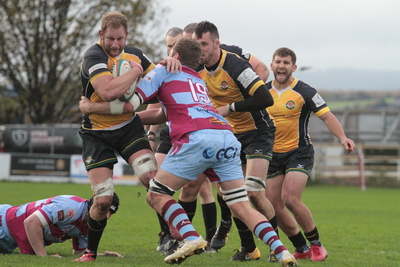 Ealing Trailfinders ended the first block of the season with a hard-fought 23-18 victory over Rotherham Titans at Clifton Lane.

In what wasn’t a vintage performance from the West Londoners in tricky conditions they ensured that they remain second in the Greene King IPA Championship after tries from Harry Casson, Mark Bright and Will Harries.

Ben Ward’s side made a fast start with Harry Casson bundling over the line after just six minutes to give the visitors an early lead. A Rotherham lineout was stolen and gave the Trailfinders the prime opportunity to score, which Casson accepted with a drive from close range which saw him dot down under the posts. Shane O’Leary’s conversion put his team 7-0 ahead.

Rotherham responded strongly and cut the deficit to just four points with a penalty from Caolan Ryan, before taking the lead just two minutes later.

A turnover on the half way line gave Drew Cheshire acres of space on the wing, and he drew in the last defender before passing inside to Will Porter who had a clear run to the try-line. Ryan converted, and edged the Titans 10-7 in front.

Dan Temm looked to have given Ealing the lead on the half hour mark after he forced his way through a tackle and dived over the line, but he was held up and play re-started with a scrum.

From the resulting scrum Ealing did go in front, with captain Mark Bright picking the ball up just inches short of the line and using enough power to ensure that the defence were unable to stop him. The conversion went wide in the blustery wind, but the visitors now held a two point advantage.

That lead disappeared straight from the re-start as the Titans were awarded a penalty in front of the posts, which was successfully kicked by Ryan to give them a 13-12 lead.

It appeared that the hosts would go in to half time ahead, but an outstanding try from Will Harries in the final play of the half made sure that Ealing would go back in to the changing rooms with the advantage.

From the base of the scrum the ball was spun straight to Joe Munro who made impressive yards before passing inside to Luke Daniels. The full-back raced clear, drew in his opposite number and had Harries alongside who ran to the line unattended to score in the corner and give his side a 17-13 lead at the break.

The Trailfinders had plenty of territory and almost all of the possession in the second-half, but they were unable to convert their dominance in to points, resulting in a nail-biting final 40 minutes.

Peter Lydon replaced Shane O’Leary on the 50 minute mark and his first action was to kick a penalty to extend the lead to seven points.

However Rotherham came back fighting and scored a length of the field try with 20 minutes remaining to bring themselves within two points. Ealing had a scrum just five metres from the line but the Titans stole it and raced away as they saw the opportunity in front of them. Once entering the 22 the ball was recycled to Will Porter who was able to go over for his second try of the match. The conversion went wide which saw them miss the chance to draw level.

Despite there being just one score between the sides, it was Ealing who were controlling the match as they searched for the bonus point try. Will Harries found himself in space on the right wing and chipped over the final defender but the bounce went agonisingly in to touch.

It was kicked to the corner and a five metre lineout presented a great opportunity, but the chance passed by and the referee blew his whistle to conclude what had been a hugely competitive match at Clifton Lane.

The win means that after the first block of matches Ben Ward’s side have registered eight wins from their nine fixtures, heading in to a blank weened before hosting Yorkshire Carnegie in a fortnight at Vallis Way.