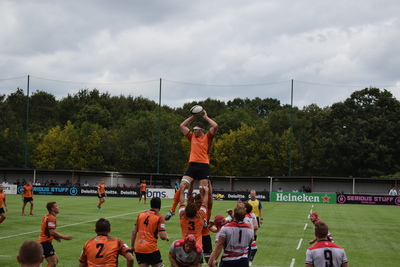 Ealing Trailfinders continued their preparations for the 2019/20 campaign with another impressive performance in a 66-10 victory over Rosslyn Park at The Rock.

Ben Ward’s men scored 10 tries in total in another dominant attacking display to give the supporters even more encouragement with just three weeks to go until the start of the new season.

The hosts started well and an early penalty from Greg Lound gave them a 3-0 lead after just three minutes, however that seemed to galvanise the Trailfinders who responded with three tries in the opening quarter.

The first try came courtesy of Alun Walker with six minutes on the clock. A penalty was kicked to the corner, and the hooker was at the base of the rolling maul which rumbled over from just five metres out. Craig Willis’ touchline conversion gave his side a four point lead.

That lead was extended five minutes later with Andrew Durutalo smashing his way to the line. A loose lineout went over the top and bounced right up to the flanker, who was able to bounce over the final defender to score under the posts.

Nathan Fowles crossed for try number three on the 15 minute mark as the lead continued to grow. Willis put up a kick on the half way line, and after Reon Joseph claimed it the ball was passed inside to Fowles who raced to the line from 40 metres.

Rayn Smid went over for try number four as the Trailfinders started to assert their dominance o the scoreboard. Craig Willis, who was looking in fine form sniped his way past two defenders and then popped the ball up to the captain who had a clear run under the posts.

Pat Howard then added further excitement to the visiting supporters as he received the ball from a lineout and used all of his power to beat three Park tackles and run over the line from just outside the 22. Willis’ fifth conversion of the half put Ben Ward’s men 35-3 ahead.

The hosts crossed the line with the final play of the half to give themselves a much needed boost ahead of the break. They entered the 22, and a break from Craig Holland who found himself in acres of space meant that he could run through to the delight of the home crowd. Lound’s conversion meant that the Trailfinders went in at the break with a 25 point advantage.

The opening stages of the second half saw both sides struggling after a whole host of substitutions with a number of handling errors stopping either team gaining any momentum, however just as the clock it 55 minutes two tries in a matter of minutes saw the Trailfinders pull away.

A huge touch-find from Steven Shingler put the visitors just 10 metro from the try-line, and after the lineout was gathered the maul powered over the line with Matt Cornish able to dot the ball down.

Straight from the re-start James Cordy Redden broke and ran 50 metres whilst beating a number of defenders. Matt Cornish took the inside pass and carried right up to the line, before Craig Hampson dummied from close range and dived over. Steven Shingler’s conversion extended the advantage to 37 points.

Sam Dickinson brought up the half century of points with 15 minutes remaining as the visitors kept building on their first half performance. Oli Robinson broke and grubbed through to Cordy Redden however the referee called play back for a scrum. Straight from the set-piece Hampson spun the ball to Dickinson who beat the last man to score.

The Club Captain then went over for his second just five minutes later as the heavy rain began to come down. The hosts had the ball on their own line but it dropped out of a ruck and fell straight to Dickinson who took full advantage and dotted down from just two metres out. The conversion from Shingler took his side over 60 points.

It got better in the final stages, and James Cordy Redden crossed for try number 10 with just five minutes left. Howard beat two men and then the ball was passed back to Shingler whose cross-field kick was judged perfectly to the winger who ran on to it and scored in the corner.

The Green and Whites went through the phases in the last minute to count the clock down, and smashed the ball in to the stands to confirm another win in impressive style.