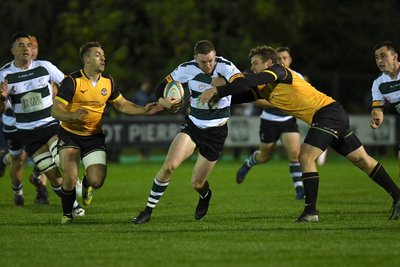 Ealing Trailfinders saw their seven-match winning run come to an end after a disappointing 42-27 defeat to Nottingham at Lady Bay.

Ben Ward’s side held a narrow 24-22 lead at half time but they were undone in the second half as the hosts rampaged their way to a comprehensive win.

A topsy turvy first half saw the lead change hands a number of times, and the first points of the match came from Jack Spittle as he put Nottingham in front. A lineout on half way went through the hands and the ball found it’s way to the winger who was able to beat the final defender to score in the corner. The conversion went wide, and that seemed to galvanise the visitors as they sparked straight back in to life.

They gathered the re-start and went through over 30 phases of pick and go’s to inch their way towards the line. Jordy Reid was then able to carry over from close range to dot the ball down under the posts. Peter Lydon converted to put his side 7-5 in front.

Nottingham then re-took the lead just three minutes later with another counter attack try, this time from Murray McConnell. A line break saw them get behind the defence and a smart offload found the scrum-half who had the pace to run clear. Former Trailfinder Shane O’Leary converted, before kicking a penalty five minutes later to extend their lead to eight points.

The West Londoners then got back in to the match on the half hour mark with a try from Kieran Murphy. With play moving towards the 22, the flanker picked up at the able of a ruck and bulldozed his way past the defenders before running through to score in impressive fashion. Lydon again converted to cut the deficit to just a point.

In frustrating fashion Nottingham were next on the scoreboard just when it seemed like the Trailfinders were taking control. A clearing kick from the visitors ricocheted off a Nottingham body and bounced up in to the hands of Will Millett who had the pace to run away from over 50 metres. O’Leary added the extras before Ben Ward’s men then rallied to take the lead at the end of the first half.

With play deep in the Nottingham 22 the Trailfinders again went through the phases, and Craig Willis stepped his way past the final defender to score their third try. Lydon converted, and also kicked a penalty with the final play of the half to give his side a 24-22 lead at the break.

Ryan Foley kicked the first points of the second half with a drop goal to extend the lead to five points, but from then on Nottingham dominated as the visitors looked unrecognisable from their recent form.

O’Leary kicked a penalty as they cut the deficit to two points, and then they went in front on the hour mark as Jack Spittle scored his second of the match as he intercepted from 80 metres before racing under the posts. O’Leary added the extras, and they then scored again with 15 minutes remaining to take control.

A number of penalties moved them up towards the try-line, and then a driving maul powered over to allow Jake Farnworth to dot down to put the result beyond doubt. O’Leary took his personal tally up to 17 points with a drop goal on the 75th minute as Nottingham went over the 40 point mark to celebrate an impressive win at Lady Bay.