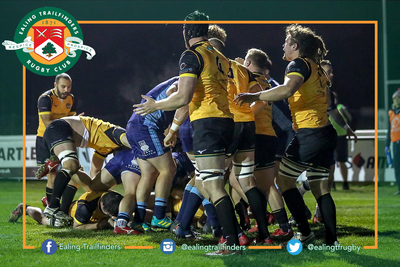 Ealing Trailfinders secured their second consecutive victory as they ground out a hard fought 31-19 victory over London Scottish at the Athletic Ground.

Tries from Rohan O’Regan, David Johnston, Will Harries and a double from Alun Walker ensured they left with a bonus point to make it 10 out of 10 in the last fortnight in Richmond and wrestle themselves back in to contention in the Championship Cup.

The Trailfinders started brightly and scored the first points of the match after just five minutes. A string of penalties saw them kick right up to the Scottish line, and the hosts were unable to stop the maul after Byron Hodge had been sent to the sin bin which allowed Alun Walker to drive over the line. Laurence May converted from the touchline to give his side an early 7-0 lead.

Rohan O’Regan scored his first try for the club on the 15 minute mark as the visitors continued to dominate the opening stages of the match. A penalty saw them enter the 22, and after going through the phases Craig Willis was dragged down just five metres from the line before O’Regan picked a great line to cut straight through the defence. May again converted to extend the lead to 14 points.

Dave Johnston then went over for the third try in spectacular fashion to put Ben Ward's side in firm control of the game. A lineout inside the 22 went straight through the hands of the backs with a whole host of dummy runners creating space for the full-back who used his pace to dive over in impressive style. May, who had his kicking boots on sent his third conversion sailing through the posts to take the Trailfinders over the 20 point mark.

It looked as if the visitors were going to put the result beyond doubt, however two Scottish tries in the final five minutes of the first half brought them right back in to the match.

The first came from former Trailfinder Miles Mantella to open their account for the evening. They had plenty of possession just outside the 22, and Jacob Perry’s grubber kick bounced up perfectly for Mantella who ran clear to score in the corner. Perry’s conversion cut the deficit to 14 points.

Then in the final play of the half a floating pass was intercepted by Elliott Obatoyinbo who ran away from the half way line to dive under the posts. Perry converted, and the teams went down the tunnel at the break with a real contest on their hands.

The second half began in similar fashion to how the first half ended as Scottish continued their momentum. They scored their third try on the 50 minute mark courtesy of Matt Eliet. The Trailfinders had a lineout deep in the Scottish 22 but it was turned over and Mantella went racing down the pitch. A penalty was then kicked to the corner, and Eliet broke away from the lineout to catch the defence by surprise and score. Crucially, the conversion went wide meaning the Trailfinders held a narrow two point advantage.

Ben Ward’s men then gradually began to wrestle back the momentum as they went back to basics by playing the territory under the floodlights, and they were rewarded on the hour as Alun Walker’s second try secured the bonus point. A penalty gave them a five metre lineout, and in trademark fashion the hooker was at the base of the maul to rumble over the line. The conversion went narrowly wide, but the visitors now led by seven points with just over 15 minutes remaining.

Will Harries then scored an outstanding try with just five minutes left to put the result beyond doubt. With the ball on the half way line the winger sneaked down the short side and used his blistering pace to run away from the defenders to trigger huge celebrations from the visiting supporters. May failed to add the extras, but the lead was extended to 12 points.

The visitors then went through the phases in the final seconds to close out another crucial victory in impressive style.