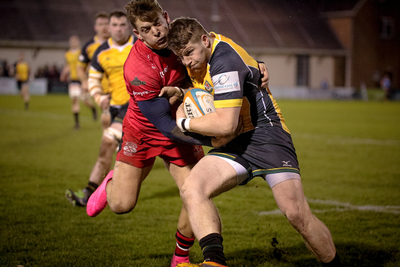 Ealing Trailfinders got back to winning ways in impressive style with a 32-24 victory over Jersey Reds at State Santander International.

Ben Ward’s side registered a bonus point win with tries from James Gibbons, Will Harries, James Cordy Redden and Luke Carter to give themselves the perfect response to last weekend’s match against Bristol.

James Gibbons got the visitors off to the perfect start with a try after just nine minutes. A five metre lineout saw a maul power towards the try-line, and after it was brought down the loose-head was at the base to bundle his way over the line. Peter Lydon added the conversion, to give the sides an early 7-0 lead.

Jersey responded straight away with a try to level the score just four minutes later. The Trailfinders were penalised and it was kicked to the corner, which allowed a maul to rumble over the line with Jack Macfarlane dotting down. Brendan Cope added the extras to bring the hosts level.

The following exchanges saw plenty of kicking with both sides looking to win the territorial battle, and it took a moment of real quality for the next score to arrive.

The West Londoners had possession in the Jersey 22, and Aaron Penberthy’s cross kick looked to be asking too much of Will Harries but he rose brilliantly to gather under pressure and score in the corner. Lydon, who had his kicking boots on converted from the touchline to extend the advantage to 14-7.

With half time approaching a turning point saw the Trailfinders score again to give themselves breathing space at the break. Again Penberthy went high with a cross kick after having possession in the 22, and James Cordy Redden rose highest for another outstanding try to the delight of the vocal travelling supporters. Lydon converted again from the touchline, to give the visitors a 21-7 lead at half time.

It was Jersey who came out of the changing rooms quicker, and cut the deficit to 21-12 with a try from former Ealing man Seb Nagle Taylor. A rolling maul was again powering to the line, and the flanker broke away to get the hosts back in to the match.

Lydon, who was kicking well from the tee edged his side further ahead with a penalty from 40 metres to put the Trailfinders 24-12 in front, before a try from Luke Carter put the result beyond doubt on the 55 minute mark.

The ball spat out of the side of the ruck on the half way line, and the scrum-half was first to respond to gather and race away. He dummied to beat the final defender and finish his 50 metre run to secure the bonus point in style.

Lydon added another penalty to extend the advantage to 32-12, before Jersey rallied late on in search of a try bonus point.

Jack Macfarlane crossed for his second try of the match with 15 minutes remaining from another rolling maul to cut the gap to 32-19, and the 1448 in attendance began to believe in late drama.

Scrum-half Calum Waters, who returned to the match day squad made a great snipe from the base of a ruck and ran past a number of defenders before being hauled down just short as he went within inches of marking his return with a try.

Jersey ensured that it would go down to the wire with a Tom Pincus try with four minutes left. Jerry Sexton’s break gave them the opportunity, and he offloaded inside to the winger who finished from close range. The conversion crucially went wide to ensure that the gap remained more than a score, and the West Londoners saw out the final two minutes to register an impressive win.

Man of the Match: Aaron Penberthy