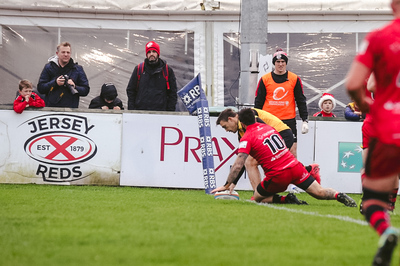 Ealing Trailfinders secured a famous victory in atrocious conditions to leave Jersey with a hard-fought 20-16 win at Stade Santander International.

It was an afternoon for defence in scarcely believable rain, and the Trailfinders put in incredible commitment to make it four wins in a row in mightily impressive fashion to halt Jersey’s 10 match winning run.

The Trailfinders were playing with the wind behind them in the first half and they got off to the best possible start with a try after just five minutes.

A scrum deep in the Jersey 22 gave the visitors the perfect platform, and after going through the phases they spun the ball wide to Seb Stegmann who was in acres of space to score in the corner. Craig Willis converted from the touchline to give his side an early 7-0 lead.

The West Londoners were using the conditions to their advantage with a series of box kicks which were causing havoc for the Jersey backs, and after being caught offside a penalty was kicked between the posts by Willis to extend the advantage to 10 points.

Jersey then began to come back in to the match after a spell of pressure and crossed for their first try on the 20 minute mark. A break in the midfield took them up to the line, and they relied on the forwards to finish off the chance with second-rower Dave McKern driving over from close range. Aaron Penberthy added the extras to cut the deficit to just three points.

James Cordy Redden had a chance with 10 minutes remaining in the first half as he intercepted a loose pass and looked to race clear but the Jersey defence scrambled back to deny him a try on his return to the side.

Penberthy then levelled the score with a penalty from in front of the posts but the Trailfinders responded with a late try to take the lead before the break.

A penalty was kicked to the corner and from the lineout Alun Walker completed a one-two with Ben West to scramble over from five metres out. Willis’ impressive touchline conversion ensured that his side went down the tunnel with a seven point advantage at the break after a badly tempered opening 40 minutes.

The Trailfinders were playing against the wind in the second half and found out how tough it would be to clear their lines in the wind when a box kick came straight back over their heads. From the resulting play Penberthy dropped back in to the pocket and kicked a drop goal, cutting the gap to four points.

The former Trailfinder had his kicking boots on and a successful penalty just two minutes later meant that Ben Ward’s side held just a one point advantage with 30 minutes remaining.

Willis then restored the four point lead with a much needed penalty after a huge shove from the forwards at scrum time, and then for the final quarter the weather turned. Astonishing gusts of wind were making the game virtually unplayable as both sides struggled to keep hold of the ball.

The Trailfinders’ front-row fronted up and began to get dominance up front which allowed them to escape danger on numerous occasions, but the Reds wouldn’t die down as they continued to go in search of a winning try.

Ward’s side held firm to grind out an outstanding victory which was summed up by the last phase of play where they defended for their lives to secure themselves a place in the Championship Cup Quarter Final, which cued enormous celebrations on the touchline.