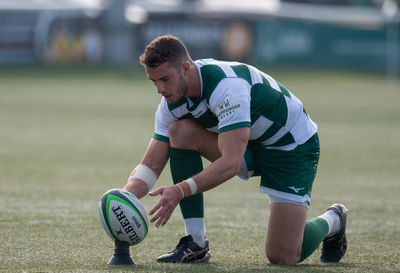 Man of the Match
Steven Shingler

Ealing Trailfinders got their Championship campaign back on track on Saturday afternoon, with a 12-try win over Craig Hammond’s Nottingham Rugby at Trailfinders Sports Club, finishing 78-19.

Ben Ward’s side responded well following a narrow 15-12 away loss to Cornish Pirates last time out, touching down six times in each half of the convincing win.

Simon Uzokwe, Rayn Smid, Pat Howard, Shaun Malton, Charlie Walker, Craig Hampson and eight points from the boot of man of the match Steven Shingler, gave the boys in Green and White a 24-point lead at the break.

Smid and Walker both completed their braces in the second forty minutes, alongside tries from Jan-Henning Campher and Reuben Bird-Tulloch, as Jordan Burns also touched down twice in the space of two minutes to conclude proceedings.

Trailfinders set an early precedent with consecutive dominant scrums, the second of which the pack were able to win possession of the ball just inside the visitors ‘22.

Scrum-half Craig Hampson raced away and offloaded to Simon Uzokwe, evading tackles to touch down, with Steven Shingler adding the extras.

Uzokwe turned provider for captain Rayn Smid to dot down under the posts to finish a rapid breakaway by the boys in Green and White, the latter stealing a Nottingham lineout to begin the counter.

With Trailfinders 14 points to the good, the Archers knew they had to start edging their way into the game, and did so with a swift reply.

Archie Vanes scored following a rolling maul to pull his side back into the affair, with Dan Lancaster adding a conversion but missing a rangey penalty from halfway minutes later.

A concerning rise in the penalty count afforded Nottingham a chance to once again kick for the corner, but once again a lineout was well intercepted by Smid to give some relief to his side.

Pat Howard restored some parity between the sides after picking up from the base of the ruck just short of the whitewash to score in the corner, as Shingler was unable to convert from the touchline.

Elliott Creed was sent to the bin in an attempt to stop yet another fast, fluid move originating from Trailfinders’ own half, where Shaun Malton consequentially scored.

Trailfinders captain Smid soon joined Creed for a brief spell on the sidelines, as Craig Hammond’s side were awarded a penalty try.

Nimble feet from Hammond found the scrum-half some space to run into, who passed to Charlie Walker infield to score under the posts.

The deadly linkup between the aforementioned pair punished the Archers for Trailfinders’ sixth and final score of the half, this time with the number nine dotting down for his first five points of the game.

Having been held up on the line in the opening attacking phases of the half, Trailfinders maintained their pressure towards the try line as head injury replacement Jan-Henning Campher crossed and scored from a brutish advancing maul.

Hampson and Walker resumed their collaborative efforts in the second half as the former assisted the latter, with Shingler converting Walker’s effort to take their side’s total to 50.

An unfortunate knock-on from Walker denied the winger a hattrick and David Johnston an assist on his 50th appearance after some terrific movement with the ball.

Trailfinders did nonetheless win the resulting scrum and after several phases, Smid crossed the whitewash for his second with Shingler adding an impressive converted kick.

Summer signing Reuben Bird-Tulloch was next to pile on the pressure in the final phase of more fantastic attacking rugby, his first try for the club as Shingler once again split the posts from a testing angle.

Good work at the breakdown denied Nottingham what looked to almost certainly be their third score of the afternoon just shy of the try line, keeping the deficit at a resounding 50 points.

Quick thinking from replacement Jordan Burns saw the scrum-half bag a brace with two pickups from the ruck to dart over each time, as Trailfinders’ final substitution Craig Willis registered his first four points from the boot.

Tim Hoyt went over in the final few minutes of the game to restore some pride in his team’s performance, with decent footballing from both Harry Graham and Morgan Bunting nearly securing a try bonus point but for the ball to make its way into touch.