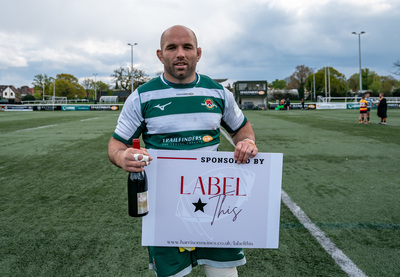 Man of the Match
Shaun Malton

Ealing Trailfinders bounced back from their Round 7 disappointment against Saracens with a convincing 69-7 victory over Richmond at Vallis Way.

Debutant Charlie Walker got his club career off to the perfect start, as the Ealing forwards softened up the Richmond defence in the midfield, before the wing latched on to a Matt Gordon break and crossed the whitewash with just four minutes on the clock.

Next up for Trailfinders was Will Davis, as he bundled his way over the line from the back of a maul, before Craig Hampson capitalised on another Gordon line break to score Ealing’s third and put them within touching distance on the bonus point.

Captain Rayn Smid was the man to earn the bonus point, though, as an arcing run saw him round the Richmond defence and storm in from 40m out. Max Bodilly then wrapped up the first half with some incisive inside steps and a poacher’s try from close range.

Richmond struck back early in the second half through Callum Watson, after a smart reverse of play caught Ealing off guard and the scrum-half was able to scythe through a hole in the defence.

Trailfinders’ front rows then came alive in the ensuing 14 minutes, with Lewis Thiede, James Gibbons and Kyle Whyte all crossing the whitewash in quick succession, as Richmond struggled to live with Ealing’s physicality.

Hampson picked up his second score of the game when he acrobatically intercepted a Richmond attack in his own 22, before taking it the length of the field and adding further gloss to the Ealing performance.

Gordon stepped up once again with a strong carry and offload that saw him assist on a third score of the game, as Bodilly was on his shoulder to secure his brace of tries. The final mention went to Shane Buckley, who wrapped up the scoring in the 79th minute.