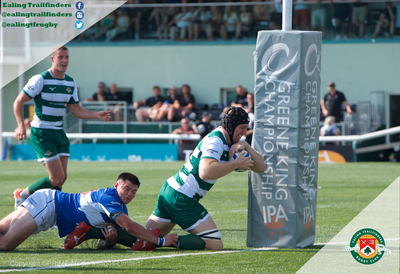 Ben Ward’s side scored 11 tries as they rampaged their way to victory in a confidence-boosting performance as they continue to build towards the 2019/20 season.

The first try came with just 10 minutes on the clock as Reon Joseph opened his account in trademark style. A long looping pass from Steven Shingler found the winger in space, and he stepped the final defender to go over in the corner. Shingler then converted from the touchline as his side took a 7-0 lead.

Peter Lydon then capitalised on a loose ball to break away from the half way line and run under the posts, before Seb Stegmann latched on to a neat dummy from Craig Hampson and an inside ball from Oli Robinson for try number three.

Harry Sloan then picked a great line from a lineout to smash his way to the line from the first phase, and Reon Joseph got his second try by intercepting from 40 metres to run through unattended. Shingler’s fourth conversion of the half extended the lead to 33-0.

In the final play of the half Nick Hankin got a deserved score for the visitors as he latched on to a grubber kick to send the teams down the tunnel at half time with the scoreboard reading 33-7 to the hosts.

The Trailfinders then started the second half in style with a try from David Johnston. A five metre scrum gave them the platform, and the captain drove over from close range to dive under the posts.

Ben West then scored with his first touch as he was the beneficiary of a flat pass to wrestle to the line from close range, and just five minutes later Seb Stegmann brought up the half century of points by towing over the final defender and gathering a cross field kick to dive over the line.

Harry Dugmore became the first Trailfinders Rugby Academy member to represent the first team and another try followed straight after, as a huge hit in defence from Craig Willis saw the ball fly out and Jordan Burns pounced to race clear.

Bishop’s Stortford crossed for their second try with 15 minutes remaining as Tom Lewis crashed over from close range, but the Trailfinders stepped up a level in the closing stages.

David Johnston’s first match as captain got even better with his second try on the 70 minute mark. Dugmore broke and was brought down just inches from the line, before the ball was spun to Johnston who scored in the corner.

The final score of the match came in the last minute as Andrew Durutalo raced on to Pat Howard’s offload to bring up the 70 point mark, and Craig Willis’ third conversion of the match ensured that the Trailfinders recorded an impressive 73-14 win ahead of their trip to Rosslyn Park next Saturday.