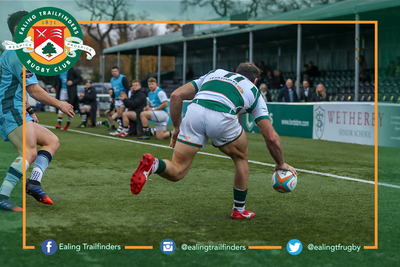 Ealing Trailfinders recorded their third consecutive victory in the Championship Cup over a spirited London Scottish side at Trailfinders Sports Club.

Ben Ward’s men scored five tries in a 29-15 win as they set up a pool decider against Jersey Reds next weekend on the Channel Island.

The visitors started strongly and scored the first points of the afternoon courtesy of a Jacob Perry penalty from 30 metres, but from then the Trailfinders dominated the first half as they built a convincing lead.

A spell of three tries in 10 minutes saw them take control of the match, with the first coming from Alun Walker who extended his try-scoring run. The ball went loose from a lineout and some great hands in the middle set up an overlap on the right wing which allowed the hooker a clear run to the line. The conversion went wide but the hosts had the lead, which was quickly extended by Will Harries.

The scrum was functioning extremely well which was resulting in penalty after penalty, and with the ball kicked to the corner Ben Ward’s side had a great position to build from. In similar fashion to the first try, they went through the hands and found the Welshman in the corner who dived over the line unattended.

Jordan Burns then extended the lead after the scrum-half capitalised on a strong run from Rayn Smid to gather the flanker’s offload and race to the line, whilst Josh Barton was sent to the sin bin in the process.

The Trailfinders secured the try bonus point before the break as Jordan Els mauled over the line in the closing stages. A fierce maul progressed all of 20 metres before the South African marked his first start for the club with a five pointer to put his side 22-3 up at the break.

Jordan Burns got the hosts’ fifth try on the 50 minute mark as once more he was the beneficiary of an impressive offload, this time from Harry Sloan who was making his first appearance of the season. The physical centre smashed his way over the gain line and released the scrum half who had the pace to run clear. Craig Willis added the extras to extend the lead to 26 points.

The Scots then took control in the final quarter as a late rally saw them score twice in the last 20 minutes. Jordan Brodley mauled over the line on the hour mark, and Josh Barton dummied from the base of a scrum with just five minutes left to give Dave Morris’ men a deserved late score.

The Green and Whites then closed out the match with some more impressive defensive sets as they secured another victory.