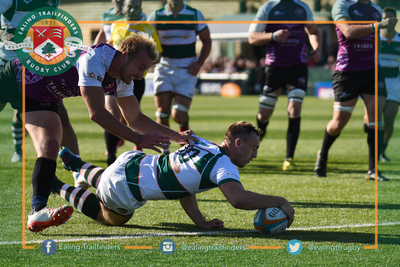 Ealing Trailfinders got their fourth consecutive win after a 41-35 triumph in a try-fest against Cornish Pirates at Trailfinders Sports Club.

Ben Ward’s men raced in to a 41-16 lead with an hour on the clock after an impressive attacking display and had the bonus point secured by half time but the Pirates came back in the final quarter to make it a nerve racking ending.

Guy Armitage got the first try of the match with a fantastic score on the 10 minute mark. A free ball allowed Craig Willis to kick across field, and the centre towered over the defender to score in the corner. Willis converted to put the hosts 7-0 in front but it was the Pirates who responded to take the lead.

Two tries in as many minutes saw the visitors go in front with a dramatic spell of pressure. Brett Beukeboom went over from close range before Robin Wedlake stepped his way past a number of defenders to score from long range. Both conversions went wide but the Pirates had a three point advantage.

The hosts then took control of the match with three tries in the final six minutes of the first half as the attack clicked in sensational fashion.

Andrew Durutalo intercepted on the half way and offloaded to Luke Carter who was brought down, but quick ball was then spun wide and Seb Stegmann was there to run to the line unattended. That put the hosts ahead and they didn’t look back with another try following just two minutes later.

Craig Willis skipped his way over the line for try number three to extend the lead. Another free ball saw the fly-half in possession, and he went himself before stepping through three defenders to dive under the posts.

Pirates prop Tyler Gendall was then sent to the sin bin for a dangerous tackle, and they were punished with another try against them with the last play of the half. From the top of a lineout an inside ball found Seb Stegmann, and he raced through a number of defenders before diving over to secure the bonus point. Willis converted to extend the lead to 26-13 at the break.

The second half began in similar fashion with another try from Guy Armitage as the scoreboard continued to increase. Former Pirate Laurence May made a break and offloaded to the centre who piled a huge hand off on the final defender before racing clear to the line.

Andrew Durutalo then appeared to put the result beyond doubt with try number six. With possession deep in the Pirates 22 the ball went straight to the American who couldn’t be stopped from close range after wrestling his way to the line. Willis converted and then added a penalty to give his side a 41-16 lead with 20 minutes remaining.

Pirates then burst in to life and two tries in quick succession from Kyle Moyle and Robin Wedlake cut the deficit to just 13 points in the closing stages.

The Trailfinders were unable to keep hold of the ball for long periods and were being put under serious pressure from the visitors who went over for the final try with the last play of the game. A neat grubber in behind bounced in to the hands of Wedlake who completed his hat trick in impressive fashion.

There was no time for the re-start meaning the Trailfinders could celebrate another bonus point win to stretch their winning run to four matches.