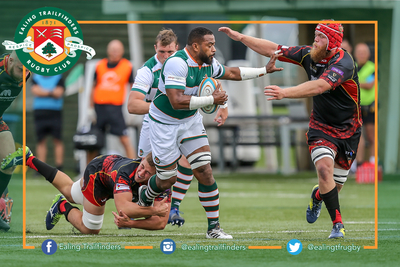 Ealing Trailfinders opened their pre-season fixtures with an impressive performance despite a 17-31 defeat against the Dragons at Trailfinders Sports Club.

With the majority of the match day squad all making their debuts for the club the time needed to gel was always going to take more than the first friendly, and that was evident with a number of opportunities being passed by.

The Trailfinders scored three tries courtesy of Lewis Jones, Craig Willis and Will Harries in what was a spirited display.

The Dragons made a fast start and went in front with just two minutes on the clock through Joe Goodchild. With possession in the midfield they had an overlap on the left wing, which allowed the centre to stroll over in the corner.

The West Londoners then grew in to the game and created a chance for Seb Stegmann but the winger was hauled down just short of the line. Segundo Tuculet then got the opportunity to beat the last defender as space opened up in front of him, but similarly he was dragged down before being able to dot the ball down.

Jordan Williams then extended the lead for the Dragons on the 25 minute mark to put them in control. Straight from the top of the lineout the scrum-half raced clear from outside the 22 and dived under the posts unattended. Jared Rosser then convered, giving them a 12-0 advantage.

That lead then grew when Ryan Bevington scored the Dragons’ third try with five minutes until the break. Again a ball straight from the lineout saw them break through the line, and Rosser drew in the final defender before allowing Bevington to score.

Ben Ward’s side then woke up and got themselves back in to the match with a try in the final play of the half. A number of phases took them up to the line, and then Ollie Stedman combined with Lewis Jones for the centre to dive over in the corner. The conversion went just wide, and the teams went down the tunnel after an energetic first half at Trailfinders Sports Club.

The Trailfinders started the second half with much more intensity and reaped the rewards with an early score from Craig Willis.

A penalty was kicked to the touch just five metres from the line, and with the maul powering towards the line the ball fell out and found Willis who beat the last defender to score. Peter Lydon converted, and cut the deficit to just seven points.

Frustratingly just as the West Londoners got back within a score it was the Dragons that would go over the line next to regain control of the match. A lineout found Brok Harris who ran through and had the pace to stretch over despite a big chase from the hosts. The conversion went wide but the lead was back up to 12 points.

Seb Stegmann and Andrew Durutalo took advantage of an overlap on the right wing to get right up to the line, but in a play that would sum up the match the ball went frustratingly forward.

The Dragons then put the result beyond doubt on the hour mark as Brandon Nansen powered through from close range, and Gavin Henson’s conversion took them up to the 30 point mark.

Will Harries made sure that the Trailfinders ended the game on a positive note with a try right at the end. The hosts went through the phases, and then Willis’ long looping pass found Harries on the wing who dived over the line.

The pre-season opener ended in defeat but a number of positives meant that the Trailfinders will head to Blackheath next week with plenty of encouragement.