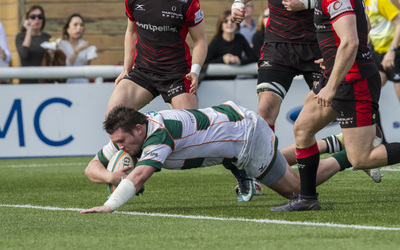 Ealing Trailfinders scored nine tries to get back to winning ways in a comprehensive 54-36 victory over Hartpury at a sun-drenched Vallis Way.

The West Londoners secured the win with tries from Rayn Smid, James Cordy Redden, Luke Daniels, Ollie Stedman, Lewis Thiede, a penalty try and two from Alun Walker to round off the home league campaign with a resounding win, meaning they are confirmed in second place in the Greene King IPA Championship.

There was just over a minute on the clock when the first try was scored, with Alun Walker latching on to the back of a maul and driving over the line to open the scoring for the day. Luke Daniels converted to extend the lead to 7-0, and that was to change quickly as a rampant first half display gained momentum.

Rayn Smid had the awareness to read a looping pass from Hartpury, and intercepted before showing impressive pace to run clear from the half way line to score the second try of the match.

James Cordy Redden then scored one of the tries of the season to continue the electric start. A turnover under their own posts then turned in to a length of the field attack with a number of offloads in the midfield creating the space for the winger to score in the corner.

Luke Daniels then secured the try bonus point with just 15 minutes on the clock to put the lead up to 26 points. Shane O’Leary’s inch-perfect cross kick found Cordy Redden on the wing, and he drew in the final defender to allow Daniels a run to the line from close range.

Hartpury then responded and came back in to the match thanks to a try from Ciaran Knight. A break in the midfield gave them the chance to go wide, and the prop then crashed over from close range to cut the deficit to 26-10.

However a penalty try for Ben Ward’s men confirmed their dominance in the closing stages of the first half. A five metre scrum was powering towards the line, and referee Tim Wigglesworth went under the posts after a huge collective effort from the forwards.

Hartpury had the last impact of the opening 40 minutes, with Alex Craig dotting down in the final play to make it 33-17 to the hosts at the break.

The visitors started the second half as they ended the first, with a try after just two minutes to bring themselves right back in to the game. A combination in the middle fooled the Trailfinders’ defence, and allowed Alex Craig to run through for his second of the match. The conversion from James Williams cut the gap to just nine points.

That gap then became four points as another try for the visitors, this time from Rob Langley who drove over from a maul set the alarm bells ringing amongst the home supporters.

The next score was to be crucial, and thankfully for the hosts it came from Ollie Stedman who was making his first appearance at Vallis Way. The back-rower picked up from the base of a scrum and had too much power as he bundled his way to the line. The conversion from Daniels gave the hosts a 40-29 lead with 25 minutes remaining.

Lewis Thiede then put the result beyond doubt with a try on the hour mark to extend the lead further. A number of phases in the 22 gave the Trailfinders some front foot ball, and Thiede was the beneficiary as he ran through to dive over in the corner.

Alun Walker then brought up the 50 point mark with his second try of the match, as an overthrown lineout fell straight in to his hands who gratefully dived straight over the line.

Hartpury had the final say as James Williams pounced on a loose kick to score under the posts, but the day belonged to the London side as they registered a confidence boosting win with two games ahead in the next week.

A trip to Yorkshire Carnegie on Tuesday night is next on the agenda in the rearranged match, before welcome Bedford Blues for the British & Irish Cup Semi Final next Saturday at Vallis Way.