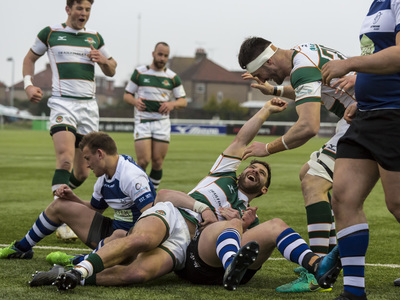 Ealing Trailfinders made it three wins in a row with a six-try 45-20 victory over Nottingham at Vallis Way.

The hosts had a seven point lead at the break but three tries in the first 15 minutes of the second half saw them pull away and register the victory over Ian Costello’s side.

The six tries came courtesy of a Luke Carter hat-trick as well as scores from Luke Daniels, Kieran Murphy and Piers O’Conor to ensure a comfortable win.

Both teams had only played once in the last month due to postponements, and that was noticeable in the opening exchanges with a number of errors as the players got back up to speed.

Luke Daniels kicked the Trailfinders in front on the 15 minute mark with a penalty, and that lead was extended to 10 points with 25 minutes on the clock as Luke Carter scored the first try of the match.

Rayn Smid and James Cordy Redden both went within inches of the line, and then the scrum-half sniped over from close range.

Nottingham responded straight away with a try from Sean Scanlon to cut the deficit. The re-start was gathered and Tiff Eden’s cross kick found Scanlon who stepped his way over to score. The conversion from Eden cut the gap to just three points, before a penalty levelled the score at 10-10.

Kieran Murphy marked his captaincy of the Green and Whites with a crucial try before half time. Sam Dickinson offloaded to the back-rower, and he rampaged his way over the line by racing clear from 20 metres. Daniels converted, and ensured the Trailfinders had a 17-10 advantage at the break.

The start to the second half was where the game was won as the hosts raced clear of their opponents to secure the bonus point.

Piers O’Conor latched on to the back of a rolling maul to drive over the line just three minutes in to the second half, with Daniels converting to extend the lead to 24-10.

Luke Carter scored his second just two minutes later with the try of the match to register the four try bonus point. Mark Bright was in the clear, and an outrageous offload gave Carter an unattended run to the line.

Nottingham again responded with a try as they looked for a way back in to the match. A five metre lineout gave them the platform, and Jimmy Stevens broke away to dive over in the corner.

Luke Daniels got the Trailfinders’ fifth try of the match just before the hour to put the result beyond doubt. Peter Lydon took a quick tap penalty and a looping pass found Daniels on the wing who ran over in the corner. The touchline conversion extended the lead to 38-15.

Carter got his hat trick from the base of a ruck as he brought up the 40 point mark with another sniping run, and Jordan Coghlan then got Nottingham’s third try with a close range score.

The match ended with both sides playing expansive rugby, but the game was brought to an end with a comfortable victory for Ben Ward’s men.