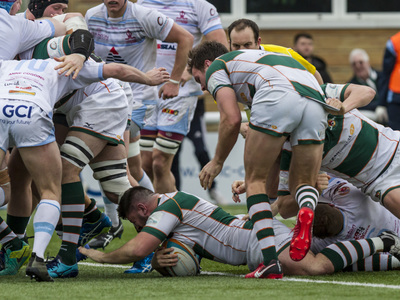 Man of the Match
Rayn Smid

With 30 minutes on the clock Ben Ward’s men trailed 26-3 but came roaring back with four tries, and eventually it came down to an 80th minute penalty from Luke Daniels to register what seemed to be an unlikely win earlier in the afternoon.

The West Londoners struggled to implement their expansive style in the first half, and it was the visitors who would race in to the lead.

They opened the scoring on the seven minute mark with a try from Caolan Ryan. The hosts were attacking but a pass was intercepted by the fly-half, and he had the pace to run away from the defenders from 60 metres out. Ryan converted his try, giving his side a 7-0 lead.

Luke Daniels, who was 100% from the kicking tee all afternoon cut the gap to 7-3 with a penalty, but Rotherham then dominated the next 20 minutes as they secured their try bonus point.

Drew Cheshire got their second try after a long looping pass found him on the wing and allowed him to run to the line unattended, and an almost identical try just five minutes later from Joe Barker ensured that they took control of the match.

The Titans’ fourth try came courtesy of Rhodri Davies as they extended their advantage to 26-3. A sniping run at the base of a ruck gave them space, and an offload inside found the scrum-half who ran clear from inside the 22. The conversion was added by Ryan, however the Trailfinders came surging back in the final minutes of the first half to get back in to the game.

Piers O’Conor scored two tries in as many minutes which gave the crowd cause for optimism after an uncharacteristic start. A penalty was kicked to the corner, and with the maul powering towards the line it allowed the outside centre to break away and score.

A neat combination from Joe Munro and Peter Lydon in the midfield then created space as the momentum built, and with the ball spun wide it was gathered by O’Conor who finished impressively after using his strength to bundle over the line. Daniels converted, and cut the deficit to 17-26 at the break.

Lewis Thiede then scored the Trailfinders’ third try of the match as the comeback continued straight after half time. Calum Waters made a break and took play up to the line, before Thiede gathered and used his power to smash through the remaining Rotherham defenders. The conversion then meant that the gap was just two points, however a penalty straight from the restart for the visitors put Rotherham 29-24 in front.

The comeback was completed with 55 minutes on the clock as Matt Cornish scored the all important try. Another penalty was kicked to the corner, and with the forwards rumbling towards the line Cornish dotted down to level the score. The conversion put the green and whites 31-29 ahead as the final quarter approached.

Both sides then looked to make the killer punch, and Rotherham came back strongly which led to another penalty for Ryan to kick over the posts to put the Titans one point ahead once again with 10 minutes left.

Luke Carter created a huge chance to score as he chipped over the top of the final defender, but the bounce of the ball was unkind and the Titans survived.

Daniels kicked another penalty to put the hosts back in front, but to the frustration of the home fans a penalty was conceded straight away which meant that Rotherham went 35-34 ahead with just five minutes left.

Ben Ward’s men refused to lie down and hammered away at the Rotherham defence in search of the match winning moment. That moment eventually came in the final minute as a penalty was awarded. Daniels kept his nerve to dissect the points once more and edge his team 37-35 in front.

There was still time for the restart but the hosts managed to close out the match and hold on for one of their most entertaining victories of the season. The result cuts the gap to Bristol at the top to 10 points with five league matches remaining as the Championship heads towards a grand stand finish.