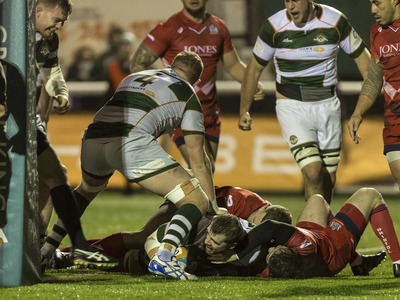 Ealing Trailfinders pushed Bristol all the way in a nail-biting top of the table clash at Vallis Way, but eventually fell 27-28 to the league leaders.

A topsy turvy match saw the West Londoners dominate for large periods, but despite a late rally they were unable to register a famous win.

Tries from James Cordy Redden and Morgan Allen as well as a penalty try put Ben Ward's men within touching distance of the victory, but Pat Lam's side continued their 100% record in the league in dramatic circumstances.

Bristol took an early lead as Tusi Pusi went over the line with 10 minutes on the clock. A break took them to within inches of the line and the ball was spread wide straight away as the Samoan dived over the line. Ian Madigan’s conversion gave them a 7-0 advantage.

The Trailfinders responded straight away with a try from James Cordy Redden to level the score. Aaron Penberthy’s inch perfect cross kick was gathered by the winger who stormed his way to the line, and with Luke Daniels’ conversion it was 7-7 with 15 minutes gone.

Ben Ward’s men started to gain ascendancy at scrum-time and were enjoying dominance up front, which led to them taking the lead.

A penalty was kicked to touch and gave them a five metre lineout, and as it was driving towards the line the referee went under the posts to award the Trailfinders a penalty try. Steven Luatua was sent to the sin-bin as a result, but the West Country side responded immediately.

Sam Jeffries ran under the posts and after a check with the TMO for a controversial forward pass the try was given, with Madigan’s conversion levelling the score.

Luke Daniels kicked a penalty with the last play of the half to give the hosts a 17-14 lead at the break, but not before Harry Casson and Gaston Cortes were sent to the sin-bin for some aggressive behaviour on the floor.

Bristol made the perfect start to the second half with a long range try from Jordan Williams. The full-back got the ball inside his own half and used his scintillating place to race away from the defenders and dive over the line. Madigan again converted to give them a 21-17 lead, but Aaron Penberthy’s 35-metre drop goal cut the gap to just a point.

Jordan Williams scored again with 20 minutes remaining to give Bristol an eight point advantage. Sustained pressure in the 22 saw them hammer away at the try-line, and then Williams was the beneficiary of an overlap on the right wing to score.

The Trailfinders responded and gave everything in the final 15 minutes in order to record a memorable victory.

Kieran Murphy was denied a try as he was held up, but from the resulting five metre scrum Morgan Allen powered his way to the line and with Daniels’ conversion the deficit was down to just a point.

Ben Ward’s men had all of the possession as they chased the win with seconds left on the clock, but Bristol were able to hold out and leave London with a hard-fought victory.