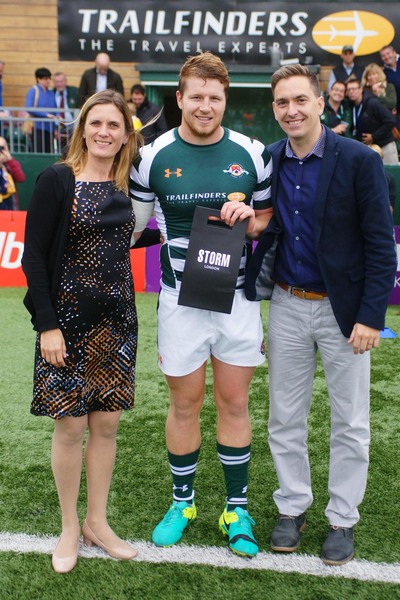 Following a hard-fought opening period, the match opened up in the second half and the Channel Islanders appeared be heading for a win after the match had swung back and forth.

Cordy-Redden had other ideas and picked a strong line from left to right to score his first try of the season. With the clock running down Jersey Reds frantically tried to regain the lead and the ball went wide to Ross Adair, but he knocked on with the line at his mercy to bring an end to the match.

After the opening exchanges it was the home team who took the lead. Ben Ward sent up a towering kick that Harry Casson claimed in the Jersey Reds’ 22. He off-loaded to Willie Ryan, who was held up, but from the subsequent scrum the pack won a penalty that Ward kicked.

Jersey Reds then took a grip through their pack and after a number of penalties they had their opposite numbers frantically defending their line. On four occasions they tried to shove the home’s side’s pack back, but each time they held firm and eventually the visitors conceded a penalty.

With a strong swirling wind neither side was able to find much rhythm, with defences staying on top, but Ealing Trailfinders doubled their lead late in the half after another high kick, this time from Luke Carter had given them good field position and won a penalty.

Ward knocked it over again and then soon after brought the end to a half which had featured more perspiration than inspiration.

The match opened up after the break and Jersey Reds quickly grabbed the lead. First Ross Adair came off his wing to race in between the posts and then fullback Jack Cuthbert rounded off a backline move down the right.

As the match moved past the hour mark Ealing had their chances close to the line and soft hands from former Jersey Reds fly-half Aaron Penberthy released Joe Munro to crash over.

Cope’s penalty on 71 minutes put the visitors back in front before Cordy-Redden’s powerful run swung the match back in the hosts’ favour. Again Jersey came, but Adair’s error put paid to their hopes of even more late drama.