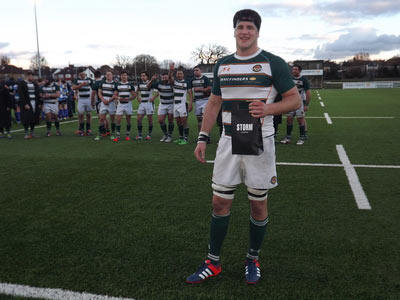 Ealing Trailfinders maintained their 100 percent home record when they ran in five tries to take the full five points on offer against a side that had pushed them hard earlier in the season.

Just as they were at the Northern Echo Arena, Darlington Mowden Park were a scrappy team who put pressure on through the forwards and liked to give their backs the chance to run the ball when the opportunities arose.

It meant that the five-try bonus point was still in the balance with 10 minutes remaining before Luke Daniels late score ensured the full compliment.

Soon after kickoff Darlington Mowden Park were reduced to 14 men when second row Ben Gledhill was yellow-carded for retaliation and Andy Reay, Ronnie McLean and Will Harries all used the numerical advantage to test the DMP defence.

Despite being a man down DMP sought to keep the ball in hand and allow their young and pacey backline the chance to attack, while halfbacks Sam Stuart and Grant Connon were happy to play on the gain line.

Gledhill was still in the bin when Ben Rath raced the length of the pitch for a try that Connon converted, but Ealing Trailfinders used their forwards to establish territorial dominance and after backs and forwards linked up, Reay popped the ball to Llewelyn Jones who ran home.

The second try arrived soon after through the well-rehearsed catch and drive route when Anders Nilsson caught the lineout and then dropped on the ball when the pack crossed the line.

Connon knocked over a penalty to close out the first half and then almost started the second in the same manner, but pushed his effort wide.

From then on Ealing Trailfinders established their grip on the match and while Alex Bradley marked his return to full fitness with a try, the team were unable to capitalise on good field positions.

In the end it was DMP who scored next when wing Tom Kill raced free down the left wing and while Ealing Trailfinders maintained their pressure Darlington Mowden Park’s defence stood firm.

They finally made the breakthrough with less than 10 minutes remaining when Daniels picked a strong line off Will Harries’ run. Daniels then turned provider when he released Phil Chesters to add a gloss to the scoreline and deny the visitors a losing bonus point.