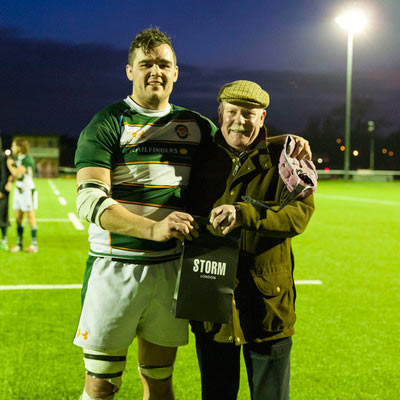 Ealing Trailfinders brought the curtain down on 2014 with a seven-try win over a dogged and determined Old Albanian side that means that Ben Ward’s side end the year top of National 1.

With former head coach James Shanahan returning to OA’s the Hertfordshire side sought to move the wide from the start and centres Dan Watt and Max Wilkins both made early breaks before Watt opened the scoring with a penalty on five minutes.

For the next 10 minutes defences stayed on top and while scrum-halves Alex Walker and Jack Daly both tried to prompt their attacking lines it was a forward, Arthur Ellis, who put Ealing Trailfinders into the lead when he scored his 12th try of the season from a rolling maul.

Phil Chesters stretched the lead further still when he latched on to Ben Ward’s cross-kick and raced home to score in the corner from his 22. Ward added the conversion, but Watt knocked over his second penalty to stay in touch.

Ealing Trailfinders’ pack began to impose itself on their opposite numbers as the first half wore on and Ellis scored his second in identical fashion to his first from the back of a rolling maul. Andy Reay then swooped on a tricky Ward grubber kick to ensure the four-try bonus point on the stroke of half-time.

Will Harries marked the start of the second half with a searing break of Tom Wheatcroft’s pass, but OA wing Chris May came back to make the interception as Chesters appeared set to run in his second try.

However, after a rolling maul was stopped short of the line, the ball went through the phases with the forward pack and eventually Llewelyn Jones crashed over from close range.

OA hit back though when Watt’s powerful run though Ealing Trailfinders’ defence was rewarded with their first try of the day that he then converted.

Shanahan’s promptings continued to keep OA on the attack, but it was Ealing Trailfinders who struck next when Harries raced into the corner after attacking the blind-side of a scrum.

Both sides stuck to their attacking intent as the match drew to a close and Nick Foster show a fine turn of speed to race away from his half for OA’s second try of the match.

Nonetheless Ealing Trailfinders had the last word when Harries scored his second off the match after claiming Ward’s kick to dive over in the corner. Ward’s conversion then meant that 2014 ended in fine style.