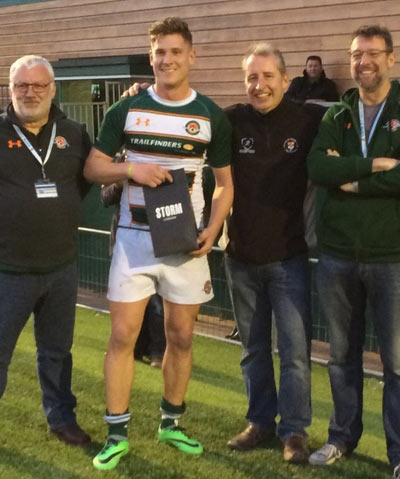 Ealing Trailfinders came good in the second half of their match at home to Hartpury College to run in eight tries and maintain their grip at the top of National 1.

Three tries were scored in the first half and five after halftime, with five going to the forward pack and three to the backline in a much improved performance from the away victory against Esher a week ago.

Hartpury College showed their intentions from the start when they took the kickoff and fired the ball wide to outside centre Tom Griffiths. Ealing Trailfinders responded in kind and tapped their first penalty from inside their 22 to show that the tempo would be high for the next 80 minutes.

After enjoying good early pressure the College opened the scoring when scrumhalf Ben Ellis scooted over from a scrum five metres out and Mitchell Burton’s conversion gave the visitors an early 7-0 lead.

Jaike Carter came close to adding a second as the Gloucestershire side maintained their early pressure, but scrumhalf Alex Walker raced across to wrestle him into touch.

Ealing Trailfinders began to work their way back into the match and Phil Chesters and Tom Wheatcroft both made good ground when they had the chance to stretch their legs.

Eventually the hosts’ pressure paid off when Red Pennycook opened his account from the club when he went over from close in.

Will Harries continued to cause the Hartpury defence all manner of problems with his running from deep and by halfway through the first half Ealing Trailfinders were enjoying the bulk of territory and possession. Tom Wheatcroft eventually put the hosts ahead when he picked a strong line to run in a try that he converted.

Burton closed the gap to two points when he knocked over a penalty from in front of the posts but Ealing Trailfinders immediately went up the other end where Arthur Ellis scored his eighth of the season.

Ealing Trailfinders came out for the second half and went straight on the attack with Steve Pape and Chris Kinloch punching holes in the Hartpury defence as the hosts sought to keep the tempo high.

Five minutes into the second half Nathan Buck secured the bonus point and moments later his fellow Welshman Alex Walker popped up on Will Harries’ shoulder for the fifth, both of which Wheatcroft converted.

Hartpury College showed that they weren’t finished though and Phil Chesters had to race back to stop Robert Fuller’s break away, but there was little the home defence could do as Steve Reynolds scythed through for a try that along with Gareth Thompson’s conversion closed the scored to 31-17 with 20 minutes remaining.

Danny Kenny twice dotted down in the corner for Ealing Trailfinders sixth and seventh tries of the afternoon and on the final whistle Sam Wardingley crossed the line for a try that Ben Ward converted to bring up the half century of points.