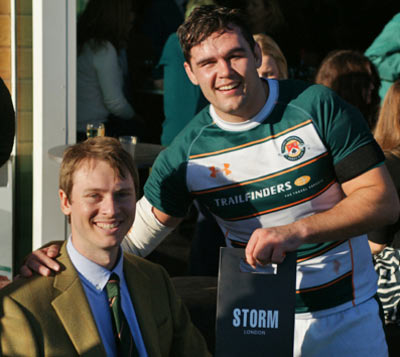 Ealing Trailfinders had to be patient to claim the four-try bonus point against a Cinderford side that came to Vallis Way in determined mood and who showed that they can cause problems for many teams in National 1.

It was an emotional day in W13 as the Club raised funds for Jack Fishwick, a former player who suffered a rugby accident that left him quadriplegic earlier in the year and who was among the fans to cheer the team on.

Cinderford began on the attack and for the first five minutes the West Country side enjoyed the bulk of possession with former Ealing Trailfinders hooker Sam Wilkes finding plenty of work in the tight and loose areas.

When Ealing Trailfinders eventually got hold of the ball it went wide to Phil Chesters who was bundled into touch just short of the line.

For next first 20 minutes Ealing Trailfinders continued to pressure the Cinderford line, but without success either in the forwards or the backs. Eventually though the pressure paid off when Sean O’Connell touched down after a scrum was driven over the line for a try that Matt Jarvis converted.

Cinderford went straight back on the attack, but a powerful tackle by Sam Wardingley in the three-quarters showed the determination in the side on a special day for the Club.

O’Connell nearly put Chesters away, but it was Cinderford who struck next when wing Henry Bird had a free run in on the right after good work by the Cinderford forwards had opened the space in Ealing Trailfinders’ defence.

Ealing Trailfinders hit back just before halftime to extend their lead. Chesters pounced on a loose pass on the Cinderford 22 to race home for his fifth try of the season, which Jarvis had little problem converting.

Captain Danny Kenny returned to the fray after halftime having gone off with a blood injury and immediate made his mark with a thumping tackle from kickoff. His fellow back-rower Arthur Ellis then went narrowly short to adding to the score as Ealing Trailfinders sought to take an early grip on the second half.

Cinderford fly-half Mark Davies struck a penalty narrowly wide and while Ealing Trailfinders enjoyed the bulk of possession and territory they had to be patient before Tom Wheatcroft picked a strong line off Ben Ward’s shoulder to score.

From kickoff Ealing Trailfinders’ defence was again called in to action when Kenny and wing Chris Kinloch teamed up to stop Cinderford wing Sam Baker.

Soon after, Ealing Trailfinders counter-attacked from deep and only failed to fully capitalise when Chesters failed to gather his kick ahead. Kinloch, Jarvis and Wardingley then came close to claiming the four-try bonus point, but were stopped by desperate Cinderford defence.

Eventually the fourth try came. Wardingley nudged a loose ball ahead, gathered and off-loaded to Chesters for the wing to score his second of the match. Jarvis’s yet again converted.

Once again Cinderford showed good heart to fight back and fly-half Davies wiggled over and converted his effort.