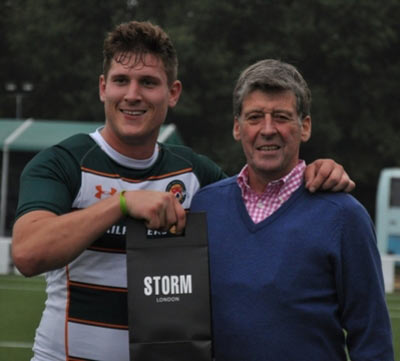 Ealing, London, 20 September, 2014 – Ealing Trailfinders ensured that they ended the day with a full 15 points and top of National 1 after running in five tries against Blaydon.

Captain Tom Brown set the tone when he caught the kickoff and went on a charge through the Blaydon defence that immediately put Ealing Trailfinders on the front foot.

Chris Kinloch carried on the momentum and after he was stopped Ben Ward picked out Phil Chesters with a crosskick, but he and Ronnie were unable to control the ball.

The hosts won a penalty from the resulting scrum and after a catch and drive from the lineout hooker Andrei Radoi burrowed over to open the scoring.

Minutes later Ealing Trailfinders extended the lead further still. Tom Wheatcroft intercepted a loose pass, broke into the Blaydon 22 and sent through a grubber to Chesters, who had the simple job of picking up and flopping over the line for his third of the season, which James Love converted.

Arthur Ellis then grabbed his third try of the season when he latched onto the back of a rolling maul, before Blaydon fought back through their pack.

Local lad Ellis grabbed his third of the season when he attached himself to the back of a rolling maul, but Blaydon were next on the scoresheet when fullback Nathan Bailey ran a sharp line to cross the line for a try that centre Andrew Baggett’s converted.

Ealing Trailfinders came close to hitting back immediately, but after nifty footwork by Love, his opposite number Bailey tackled him into touch.

They managed to wrap up the bonus point before the break though. Wheatcroft again latched onto a loose pass, raced away and McLean kept the move going by finding Chesters out wide and he scored in the corner.

The first half scoring didn’t end there though and Love knocked over a penalty on the stroke of halftime to stretch the lead further still.

Chris Kinloch carried on the scoring eight minutes into the second half with his first try of the season and with Love’s conversion from the touchline it put the hosts 30 points ahead.

It continued in that vein as the match drew to a close, both teams unable to find a way through determined tackling, though Ellis came close to adding a second when he was stopped on the line.