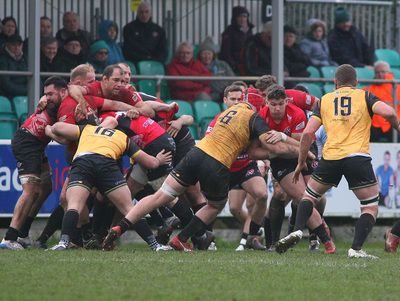 Man of the Match
Jordan Burns

Tries from James Cordy Redden, Rayn Smid and a double from Jordan Burns ensured they left Cornwall with a memorable win in a match that they dominated throughout.

Despite a whole host of issues with transport meaning a delayed arrival the Trailfinders came flying out of the blocks in the early stages and went close to opening the score after just two minutes.

After gathering the kick off they went through the phases and a break from Will Harries saw him race towards the 22 before offloading to Jordy Reid. The flanker went close to the line but was bundled down as the Pirates managed to scramble the ball back.

The West Londoners went in front on the 10 minute mark as they turned their early display in to a lead courtesy of James Cordy Redden. A penalty was kicked to the corner and the visitors edged their way towards the line before a Laurence May dummy opened up the defence. The former Pirate offloaded inside to the winger who was able to dive over from close range. Peter Lydons’ conversion extended the lead to 7-0.

The hosts began to grow in to the game as a number of penalties allowed them to enter the Trailfinders territory. They got back in to the match with half an hour on the clock as AJ Cant crossed for a try. Alex Day picked up from the base of a ruck and a neat grubber in behind bounced up to Cant who was able to score in the corner.

That was quickly followed by a penalty from Harvey Skinner to put the Pirates in front as we approached half time, but a crucial score from Rayn Smid put the Green and Whites ahead with the last play of the half.

Another break from Will Harries took the visitors in to the 22, and the ball was spun to Smid who beat the final defender to score. Lydon’s conversion put the Trailfinders 14-8 ahead at half time.

Pirates looked for a quick response after the break and a penalty took them up to the five metre line but an outstanding piece of defence from the forwards managed to pull the maul down to stop what appeared a certain try.

Jordan Burns then scored a crucial try 10 minutes in to the second half to give the Trailfinders some much needed breathing space. Rohan O’Regan latched on to a pass to create space down the wing, and he offloaded inside to the electric Burns who raced clear from 35 metres to dive under the posts. Lydon again added the extras to put his side 13 points ahead.

Both sides then turned to their kicking game as they looked to get territory as the wind began to pick up, but it would be the Trailfinders who would get the next score to secure the crucial bonus point.

In almost identical fashion Kieran Murphy made a break from the base of a ruck before passing to Burns who once more had the pace from 30 metres to stun the Mennaye Field crowd and send the travelling supporters in to raptures. Lydon’s conversion from in front od the posts but the result beyond doubt as the lead moved out to 20 points.

Matt Cornish then went close to adding further gloss to the scoreboard as he intercepted and passed to Cordy Redden but he was brought down as the Pirates defence looked to deny the visitors another score.

The Trailfinders held firm in the closing stages to smash the ball in to the stands and confirm a highly impressive victory which will give them the perfect boost ahead of next weekend’s Championship Cup Semi Final.