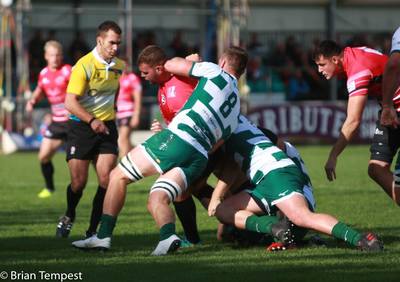 Ealing Trailfinders continued their fantastic start to the season with their best win of the campaign so far as they comprehensively defeated Cornish Pirates 38-10 at the Mennaye Field.

A sensational second half saw the visitors leading 12-10 with half an hour remaining, but then they transformed their play and took the game away from Pirates in impressive style.

Elliot Millar Mills, James Cordy Redden, Angus Kernohan, Kieran Murphy, Jordan Burns and Shaun Malton all crossed the try-line in a victory that will be remembered for a long time.

The Trailfinders got off to the perfect start, which has become a regular occurrence so far this season, with Elliot Millar Mills scoring the opener after just five minutes.

A succession of penalties took the visitors to within five metres of the line, and they took it quickly before spinning the ball wide to the prop who powered over in the corner. Craig Willis’ brilliant touchline conversion put his side 7-0 ahead.

Another half chance opened up just five minutes later for James Cordy Redden who ran a great line against the traffic at the breakdown, but he was met by the Pirates defence who stayed firm and stopped a second try.

In a hugely physical opening 40 minutes both sides were finding the wind challenging, and most of the rugby was played in the middle third with the weather making handling difficult.

Pirates thought they had got level with an interception on the 20 minute mark, but the referee called play back for an earlier infringement which allowed the Trailfinders to clear.

Craig Willis and Simon Uzokwe combined brilliantly in the midfield to unlock the Pirates defence as the visitors went in search of another score, but just as play entered the 22 the ball was stolen at the breakdown and the hosts cleared.

The Pirates then grew in to the game and Ward’s men were struggling with their discipline, which resulted in Will Cargill dissecting the posts to cut the lead to just four points.

Crucially, the Trailfinders got a valuable try with the last play of the first half to put themselves firmly in the ascendancy. The Pirates had a lineout in their own 22 but it was stolen by Rayn Smid, and then Willis patiently dragged in the defenders before releasing Cordy Redden who dived over in the corner for a much-needed score. The conversion blew just wide in the wind, but the Green and Whites went down the tunnel with a nine point lead.

The Pirates got the second half off to a flying start with a try just two minutes after the restart to get themselves right back in to the match. Cargill’s up-and-under was misjudged by the Trailfinders back-three, and it bounced up perfectly for Shae Tucker who was able to stroll through in a moment of great fortune for the hosts. Cargill added the extras, making the score 10-12 with plenty of rugby still to play.

Then came the crucial spell of the match, as the Trailfinders took a significant step towards victory. A spell of six consecutive penalties saw the Pirates have both Tom Duncan and Shae Tucker sent to the sin-bin for repeated infringements, and the visitors made their 13-man opponents pay.

The latest penalty was quickly tapped, and then Craig Hampson and Max Bodily shifted the ball to Angus Kernohan who was able to finish in the corner. An outstanding touchline conversion from David Johnston in to the wind extended the lead to nine points.

That lead then grew straight after as the bonus point was secured in sensational style. A frantic passage of play saw the ball change hands multiple times, and it was eventually charged down by Pat Howard. The centre was able to gather, and it ended up in the hands of Kieran Murphy who ran over the final defender to score. Johnston added the extras, putting his side 26-10 ahead with 20 minutes to go.

Jordan Burns then put the result beyond doubt with a trademark try in the final 10 minutes. Another sequence of penalties took play up to the line, and the scrum-half spotted a gap at the fringe of the ruck to snipe over for try number five.

Shaun Malton added further gloss to the score-line with the final play of the match, as he went over for the sixth try. A five mere lineout gave the maul the platform, and the hooker was on hand to bundle over from the base. The conversion went just wide, but the win was confirmed in an almighty statement from the Trailfinders.