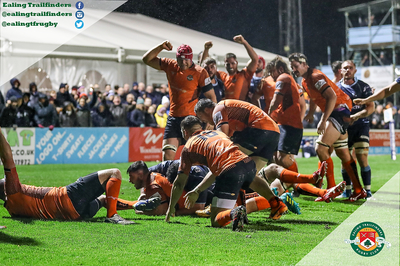 Ealing Trailfinders ground out a crucial victory over Bedford Blues in treacherous conditions to leave Goldington Road with an 18-5 win.

Ben Ward’s side took advantage of a superior set-piece in the first half to build a lead, and it would not be breached in the closing stages as they deservedly registered back-to-back wins in the Greene King IPA Championship.

The wind and rain arrived shortly before kick off and didn’t let off for the entire evening making running rugby virtually impossible, so the Trailfinders relied on their rolling maul to give them the advantage.

Matt Cornish put the visitors in to the lead with just four minutes on the clock as they came flying out of the blocks. A penalty was kicked to the corner by Craig Willis, and from the lineout the maul powered to the line, allowing Cornish to dot down. Willis added the extras to put his side 7-0 ahead.

Bedford responded with 18 minutes on the clock to get themselves on to the scoreboard. They went through the phases in the 22 and then spun the ball wide to Ryan Hutler who beat the last defender to score in the corner. The conversion sailed wide in the wind, ensuring the Trailfinders held a two point advantage.

Willis then extended the lead to five with a penalty just before the half hour mark, and then in the closing stages of the half a crucial moment saw Cornish score his second to put his side in the ascendancy.

A penalty just five metres from the line was again kicked to the corner, and in identical fashion Cornish broke away from the maul to the delight of the visiting supporters. The conversion went just wide, but the Trailfinders went down the tunnel at the break with a 10 point lead.

In those conditions a 10 point advantage was always going to be significant, and the scrum began to shine in the second half with a succession of penalties leading to two yellow cards for the hosts for Josh Buggea and Karl Garside.

A number of penalties were kicked to the corner but the wind meant that the lineouts were going astray and the chances passed by.

Craig Hampson and Reon Joseph combined off the base of a ruck as they looked for an inside pass which would have set the winger free, but again in the rain the ball popped out of his hands.

Craig Willis then kicked his second penalty with just fifteen minutes left to increase the lead to 13 points, and despite Bedford looking for a way back in to the match the Green and Whites kept their try-line intact in the final stages to ensure that they left Bedford with an impressive victory.

The Trailfinders welcome Coventry to Trailfinders Sports Club next Saturday as they eye a third consecutive win to keep up the pressure in the early part of the season.