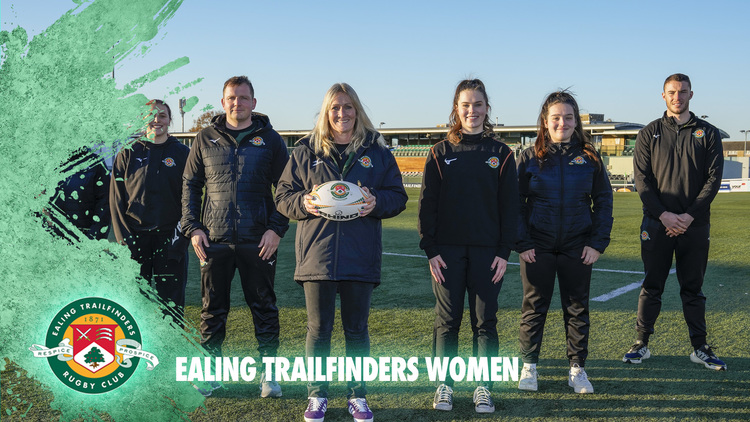 A new chapter in the proud history of Ealing Trailfinders has been confirmed with the RFU announcing that the club has been successful in its application to join the Allianz Premier 15s.

Ealing Trailfinders Women will be based at Trailfinders Sports Club, with world class facilities, coaches and support staff, with home fixtures taking place on the main stadium pitch, with a current capacity of 5,000.

Director of Women’s Rugby Giselle Mather, who joined the club in July, spoke of the significance of announcement and the impact it will have on the growth of women’s rugby.

“This is a very special day for everyone involved with Ealing Trailfinders. It’s one of those moments that will be highlighted in our history for years to come. We are incredibly proud to have been successful and delighted to have the opportunity to bring elite female athletes, coaches and support staff to Ealing Trailfinders. The programme will not only benefit the 45 players selected in our Premier 15s squad, but will have a hugely positive impact on the growth and development of women’s rugby at all levels.”

“This has been a huge effort and an enormous achievement from everyone involved at the club. Over the last few years we have invested heavily in building sustainable development pathways from the bottom up. We have partnered with several PODs (Places of Development), clubs and schools with thriving girl’s and women’s programmes, and created pathways for their talent to progress to elite rugby. We have set up a Women’s Academy at Brunel University and Henley College, alongside a comprehensive women’s programme at Cardinal Newman, with top class coaches, medical, fitness and support staff, to help players develop their rugby, while giving them the opportunity to study and prepare for their future. Having a clear and extensive pathway from school and club rugby to Premier 15s at Ealing Trailfinders will provide players with enormous opportunities.”

Ben Ward, Managing Director of Ealing Trailfinders Professional Rugby Management, spoke of the importance of the announcement and achieving the club’s 2022/23 objectives.

“This is a landmark moment in our club history and one that we’re extremely proud of. This season our objectives have been clear. Promotion to the Men’s Premiership, BUCS Super Rugby for our Men’s Academy at Brunel University and a full-time Women’s Premier 15s squad. To achieve one of these objectives just before Christmas, and be on track with the other two, is a huge testament to the investment and hard work of everyone involved in this process. I would like to thank the entire team at Ealing Trailfinders for their hard work during the application, with a huge thanks to the considerable investment and long-term support of club owner Sir Mike Gooley.”

“It’s absolutely brilliant to have a Premier 15s team here at Ealing Trailfinders. It highlights how far the club has come and will create an incredible playing atmosphere. Having the opportunity to train alongside female rugby players in a highly driven and elite environment will be a massive benefit to us all. We’re extremely excited by this news and we can’t wait to welcome the women’s squad to Ealing Trailfinders and support their progress and success over the coming years.”

Ealing Trailfinders will now commence the process of recruiting an exciting squad of players, coaches and staff for the upcoming 2023/24 Premier 15s season. More information will be circulated in due course.