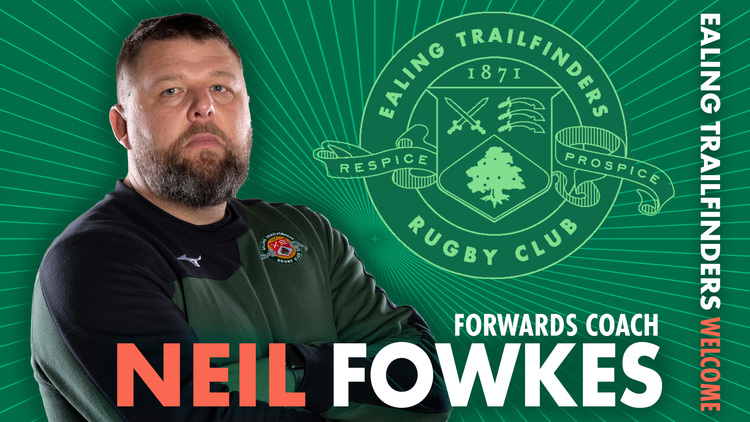 Ealing Trailfinders are delighted to announce that Neil Fowkes has joined the club as Forwards Coach.

Neil has a huge amount of playing and coaching experience, most recently having been the Scrum Coach at Wasps since July 2020, helping take them to the Premiership final later that year which they narrowly lost to Exeter Chiefs.

Before that, Neil had spent over 20 years at fellow Championship side Nottingham Rugby, first as a player and then as a coach.

As a player he made over 220 appearances for the Midlands side and was part of the squad that achieved promotion to the Championship, during the 2003/04 season.

Then on retirement he moved straight into a coaching role with the ‘Archers’, working alongside both Glenn Delaney and Martin Haag as Forwards Coach.

Neil was also instrumental in the establishment of the Nottingham Trent University (NTU) Rugby programme which was originally delivered by the club and has seen more than 50 players represent the ‘Green and Whites’.

In July 2018 he was promoted to Head Coach and memorably guided Nottingham to the Championship Cup semi-final during the 2019-20 season, which was ultimately cut short due to the Covid-19 pandemic.

On joining the club, Neil said: “I’m really pleased to be joining Ealing Trailfinders, a club with huge ambitions and a clear vision of how they want to get there.

“The Championship is a league I know well, both as a player and as a coach, and so I’m looking forward to testing myself there again. I’ve already been coaching at the club for a few weeks and I’m really enjoying getting to know the boys both on and off the field.”

Director of Rugby Ben Ward said: “I’m really pleased to have recruited someone of Neil’s quality so quickly after losing JT. He has already settled into our environment very well and with his detailed knowledge of the Championship and the Premiership he will be invaluable for us as a club going forward.”