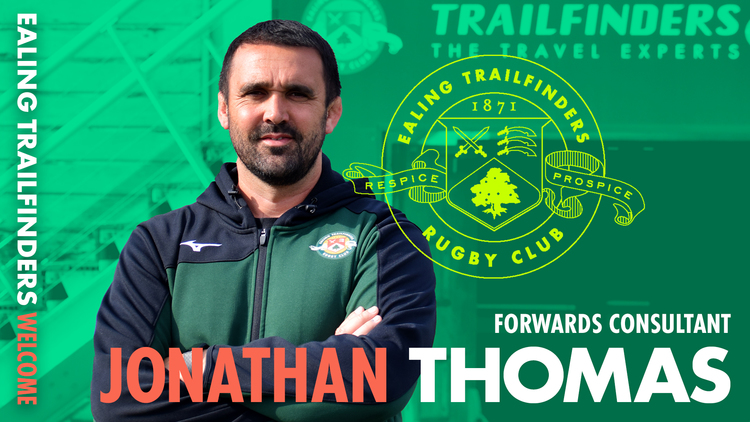 Ealing Trailfinders are delighted to announce that Jonathan Thomas will assist the coaching team as a Forwards Consultant.

Thomas (JT) joins us with a wealth of experience and expertise to help improve the team. He has previously been Head Coach at Worcester Warriors, from 2020 up until the start of this year. Before that he spent four years at Bristol Bears as Defence and Forwards Coach learning under Pat Lam. He helped the Bears achieve promotion to the Premiership and win the Challenge Cup (their first ever European title).

JT took up his role at Bristol immediately after finishing his hugely successful playing career. He represented Swansea, Ospreys and Worcester Warriors throughout his 14 year spell as a player. He was capped 67 times by the Welsh National team, starting every game during their 2005 and 2008 Grand-Slam winning campaigns. He went to two World Cups (2003 and 2007) and appeared in every Six Nations squad between 2004 and 2011.

Lam described him as “excellent team man and an outstanding young coach” when he left Bristol and JT has already started helping the squad.

JT said: “I’m really pleased to be here at Ealing and everyone at the club has been so welcoming, that I feel like I’ve been here for ages.

Director of Rugby Ben Ward said: “I’m really pleased to have been able to recruit someone of JT’s quality and know-how to help aid our coaching team. He is an incredibly exciting coach with Premiership experience and also the knowledge of how to get a team promoted from the Championship after being part of the Bristol staff that did so.

“He’s already slotted in well to our setup and I know the boys are learning a lot from him.”

This appointment comes after the mutually agreed release of Forwards and Defence coach Glen Townson. Due to family reasons, Glen was looking for a role closer to his home in Bristol. Everyone at Ealing Trailfinders thanks Glen for his work at the club, both as a coach and a player, and wishes him all the best for the future.