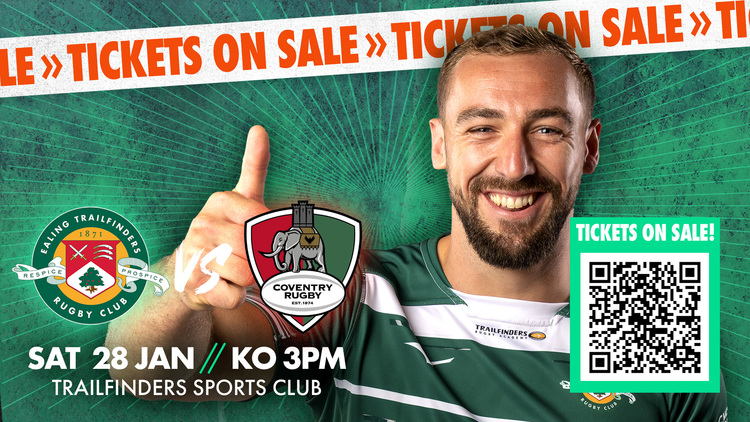 Book your tickets for our Championship blockbuster against Coventry this Saturday 28th January at Trailfinders Sports Club.

Thank you to Saturday's Match Sponsor, David Lloyd. Set on 27 acres David Lloyd Acton Park Health Club is a first-class fitness destination for all the family. They have swimming pools and tennis courts available to use throughout the year, a cutting-edge gym and plenty of fitness classes to keep you in peak physical condition. Click here to visit the David Lloyd Acton Park website.

PLAYER OF THE MATCH SPONSOR:

Our club shop, including our 2022/23 replica shirt, will be in operation from 1:30pm and will remain open throughout the game and post-match.

Our free digital match programme will be published on the Friday before the game. The programme will be available on our website and social media channels. You can also scan the QR code posters at the ground to read for free.

WHAT TO EXPECT FROM THE OPPOSITION:

One of the form teams in the league, Coventry have been on a run over the last couple of weeks, only losing once in the league since early October.

Their one defeat did come against Hartpury, who Trailfinders beat last weekend, and it was in very similar circumstances as the game was moved to their 4G due to their main pitch being frozen over. It was end to end game, with 80 points being scored as Hartpury ran out 45-36 winners.

Coventry got on their run with a statement 47-7 win over Doncaster Knights at the start of December, which was then backed up by a big win over Richmond before Christmas, and a strong showing away at Nottingham on Boxing Day.

Two weeks ago Coventry went head to head with second placed Jersey Reds. It was an enthralling fixture, which saw Coventry up 19-5 with nine minutes to play, before Jersey clawed their way back to make it 19-19 at full-time. Despite not securing the win, the draw with Jersey shows the quality of Coventry, as aside from Ealing Trailfinders, they are the only team to have taken points off Jersey Reds so far this season.

We travelled to Butts Park Arena at the start of October in what was probably our most complete performance of the season so far.

Early scores from Max Bodilly and Jonah Holmes saw us 0-14 up in as many minutes before a delicious free flowing move put Reuben Bird-Tulloch in for our third.

The bonus point was wrapped up just after the half-hour mark with Craig Willis on the end of an overlap before he converted his own try to make it 0-28 at the break.

The second half started with Holmes grabbing his second before Coventry got on the board from a rolling maul.

Our forwards responded almost immediately, first through Shaun Malton on the back of a rolling maul and then Jordan Burns dotted down after a push over scrum.

With the clock in the red, Carlo Tizzano crossed to bring up the half century as we ran out 5-50 winners.

Although it was an impressive performance, since then Coventry have found their rhythm and we can expect a far tougher test this weekend.

HOW TO FIND US:

From the A40 take the B452 turn-off towards Ealing (actually signposted as Perivale) along the Argyle Road. Pass through a set of traffic lights and across a roundabout. At the second roundabout, (about 0.5km) turn right into Vallis Way. Trailfinders Sports Club entrance is at the end of the road. Click here to view map.

Car parking is available at the ground and costs £5 per vehicle. You can purchase your parking ticket at the gate via card or cash.

You can take a national rail train from Paddington to Ealing Broadway and then hop on a bus (see below). Click here for the latest National Rail updates.

Many buses stop in the vicinity of Trailfinders Sports Club, including the 297, E1, E2, E7, E9 and E10. The nearest bus stop to the ground is 'Scotch Common', which is a five minute walk to the club.

For further information or assistance please email us on: info@etprm.com.

WE HOPE YOU ENJOY YOUR MATCH DAY AT EALING TRAILFINDERS!