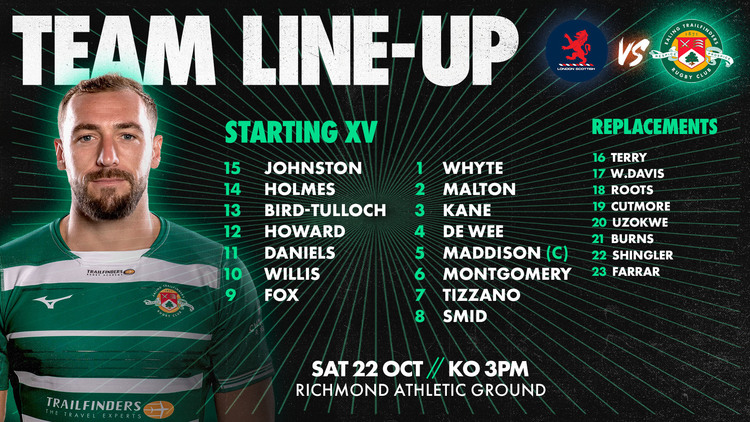 Up front, Ross Kane makes his debut at tight-head, where he packs down alongside Kyle Whyte and Shaun Malton.

In the engine room, Bobby De Wee wears the number four jersey next to Barney Maddison who skippers the squad from lock.

In the back-row, Will Montgomery and Carlo Tizzano create another exciting partnership on the flanks, while Rayn Smid starts at number eight.

The other starting debut features at scrum-half, with Ollie Fox achieving his first cap, while Craig Willis returns at fly-half.

In the backline, Pat Howard and Reuben Bird-Tulloch reunite in the midfield, while Luke Daniels, David Johnston and Jonah Holmes form a devastating prospect for the London Scottish defence.

On the bench, Danny Cutmore is in line to make his Trailfinders debut, while Simon Uzokwe and Rob Farrar are among the replacements looking to make an immediate impact.

For those making the short trip to the Athletic Ground tickets are on sale here. Alternatively, you can follow our Match Day Live coverage by clicking here.

The Ealing Trailfinders Supporters Association are hosting their pre-match meet at The Shaftesbury Pub, 121 Kew Road, Richmond, TW9 2PN from 1pm to 2.45pm. All supporters are invited to attend.