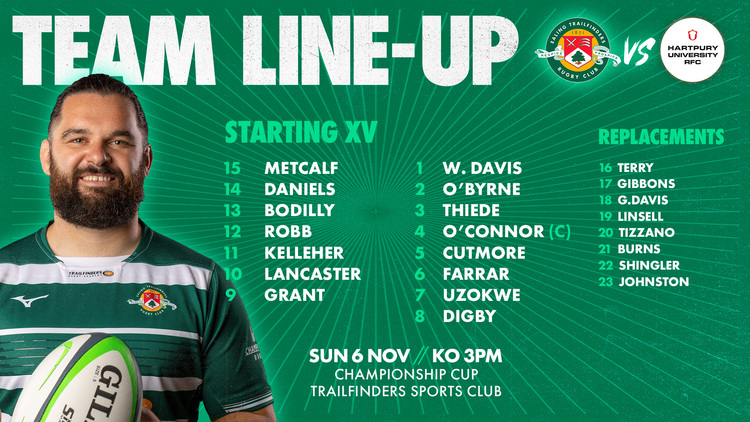 There will be two debuts within the squad as Peter Robb starts at inside centre while Kevin O'Byrne comes in at hooker.

O'Byrne will be joined by Will Davis at loosehead and Lewis Thiede at tighthead, with David O'Connor and Danny Cutmore providing the power from the engine room.

The back-row will be made up of Rob Farrar, who was very effective last weekend; Simon Uzokwe, who scored a brace of the bench against Nottingham; and Jack Digby who will be getting his first start of the season.

There is a new halfback combination as Jack Grant comes in for his full debut to partner Dan Lancaster.

The previously mentioned Peter Robb will link up with Max Bodilly to create an exciting centre paring, while the back three of Cian Kelleher, Luke Daniels and Jack Metcalf will look to exploit any loose Hartpury kicking.

Wasps and Worcester Warriors season ticket holders are invited to attend Ealing Trailfinders home games free of charge for the remainder of the 2022/23 Championship season. To take advantage of this offer click here.