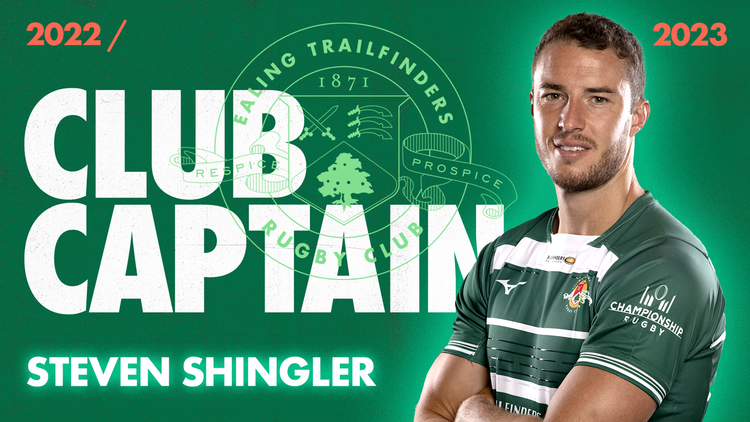 Ealing Trailfinders are pleased to to reveal that Steven Shingler has been appointed the new Club Captain for the 2022/23 season.

The fly-half has excelled in West London ever since he made the move over to Trailfinders Sports Club.

Steven started his career at home in Wales playing for Llanelli RFC, where he earned his first of 14 caps for Wales U20. In 2011 he signed for London Irish for his first stint in English Rugby. After making 47 appearances there he headed back to Wales with the Scarlets and stayed there for three years, playing 75 times and scoring an impressive 348 points.

In 2016, he headed east of Llanelli to join rivals Cardiff Blues where he scored 205 points in 60 appearances whilst battling with the likes of Gareth Anscombe for the starting shirt.

Having amassed 36 appearances for the Trailfinders since joining in 2019, Steven has become a clear leader within the squad, both in terms of his words and in terms of his actions in training and on the pitch.

After being told about his new role at the club, he said: “It’s a huge privilege to be named Club Captain for the season. Rayn (Smid) has done a fantastic job since I’ve been here and he got up and introduced me in the team meeting and I know he’ll continue to have an impact here. The challenge for me now is carrying on all the great work from Rayn and ensuring that we are successful this year.

“I’m really excited for what we can all achieve. We’ve had a good crop of new boys in and I think we’re probably a stronger squad than we were last year, it’s now just about creating a culture and an environment where we can achieve our aims this season.”

Director of Rugby Ben Ward said: “After listening to input from the players and staff, Shings (Steven Shingler) was the outstanding choice to be our captain for the upcoming season.

“Although he is our Club Captain, we’ve fortunate to have many impressive individuals here who are all leaders in their own way. Because of this, each week we’ll pick a team based purely on merit and we will select a match-day captain based on who we think will be the best choice to lead the lads for that game.”