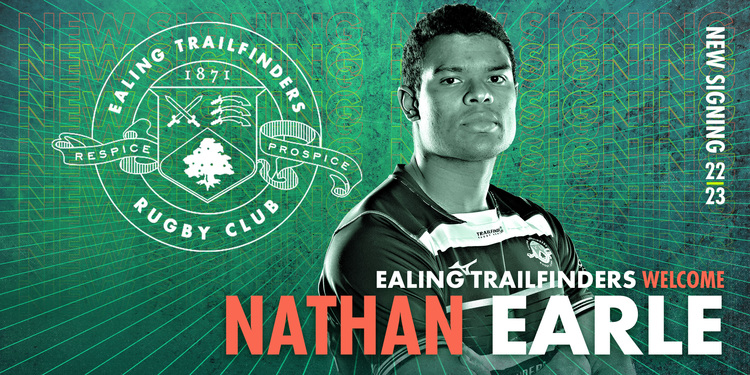 Ealing Trailfinders are excited to confirm the signing of winger Nathan Earle who has joined the club with immediate effect.

The Hong Kong born speedster arrives in West London following two seasons with Newcastle Falcons, where he scored 5 tries in 17 appearances. Prior to his move to Newcastle, the 28-year-old won Premiership titles with Saracens and Harlequins, scoring for Sarries in their 27-10 win over Exeter Chiefs in 2017, and was part of the Quins squad which went on to win the 2021 final.

Crossing for 23 tries in 53 Premiership appearances prior to joining Newcastle, the lethal winger scored on his England debut in a non-cap fixture against the Barbarians in 2017, before achieving a call-up to England’s tour of Argentina later that year. An England U18 and U20 representative, Nathan also won New Zealand’s NPC, scoring for Canterbury in their 2016 final victory over Tasman.

Upon joining Ealing Trailfinders, Nathan said: “I’m hugely excited about the challenge ahead and looking forward to contributing to this group and working together to achieve our objectives this season.

“It’s a club with a massive amount of ambition and as a player there is nothing more motivating than being in an environment that wants to win every game and are determined to progress to the very top of English rugby.”

Ben Ward, Ealing Trailfinders Director of Rugby, commented: “We’re delighted to have Nathan joining the club as we progress into the second half of the season. He’s a quality individual with enormous talent and experience and we’re confident he will make an immediate impact at our club.”