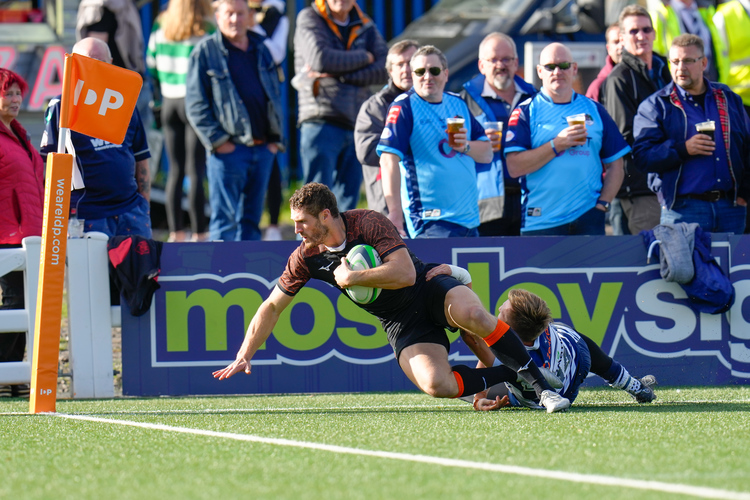 A dominant eight-try performance away at Coventry saw Ealing Trailfinders climb to the top of the Championship table.

A brace from Jonah Holmes and a superb defensive display saw the Trailfinders finish the first four games with maximum points and will complete this first block of games at home next weekend as we welcome Richmond to Trailfinders Sports Club.

In recent weeks, Trailfinders have perhaps been slightly slow out of the blocks, but that was not the case this weekend. Within the first five minutes a well worked move allowed Max Bodilly to slice through the Coventry defence and glide to the try-line. Craig Willis slotted the conversion and Ealing were up and running.

After the fast start, Coventry were looking to reset and slowly build into the game by keeping the ball tight and launching their attack through set-piece. On the quarter of an hour mark they looked to go wide on the back of their line-out. The winger ran into Holmes and within an instance the Welsh international had stripped the ball and was running the try in from 70m out. He dotted down under the sticks without anyone laying a finger on him and it was 0-14 in a many minutes.

With a healthy lead, the shackles were off and next came potentially the best try of the day. Slick handling on the half-way line eventually released Holmes through a gap before offloading to Reuben Bird-Tulloch who was next to get his name on the scoresheet.

It took only 32 minutes to wrap up the bonus point, as the forwards drew in the numbers in the centre of the park, allowing the ball to be spun wide. Willis strolled in the four score, with an extras two men queuing up outside of him. He converted his own try to make it 100% off the tee in the first half as Trailfinders went in 0-28 up at the break.

The second half started in a very similar fashion to the first, with a really impressive score. More intricate handling put Luke Daniels into space who drew the final man before putting Holmes into the corner for his second.

It was just after the 50 minute mark that Coventry got their first try as they broke off from a rolling maul five metres out and managed to bundle over in the corner.

Ealing responded almost immediately, with a rolling maul try of our own as Shaun Malton went over from 10 metres out. The forward dominance continued 15 minutes later, as a five metre scrum powered the hosts backwards, allowing Jordan Burns to dot down for his second in as many weeks.

With the clock in the red, Ealing went in search of the half century. An expansive passage of play eventually saw Carlo Tizzano claim the loose ball. The league’s top try-scorer was tap tackled 10m out, but managed to get back to his feet and dive over the line to take his total for the season to five.