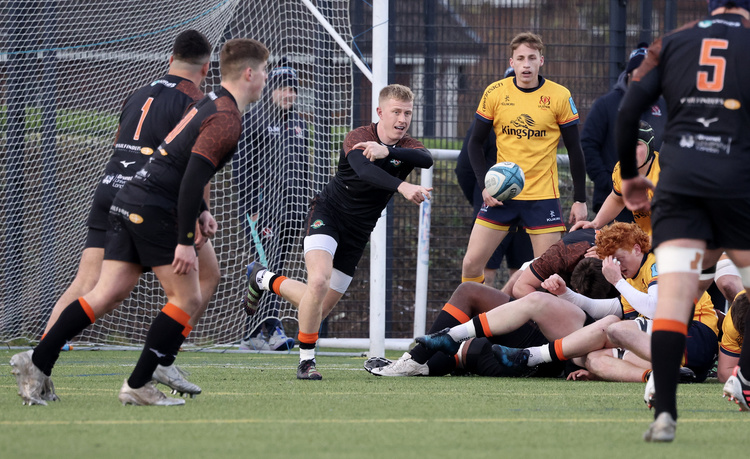 Ealing Trailfinders A put in a valiant performance in Belfast as they fell 19-15 to Ulster A.

The team, which was compiled of 13 players currently in the Trailfinders Rugby Academy based out of Brunel University, were expecting a tough contest against the Northern Irishmen, but ultimately they looked more than able to compete with their URC opposition.

After fears prior to kick off about a frozen pitch were dismissed, the hosts came out of the blocks fast, and almost scored on two occasions, but our scramble defence was able to hold firm.

We slowly built into the game, with our scrum being a particular weapon, as we won four scrum penalties in the first 40, but sadly we were unable to find the final clinical touch which saw us trouble the scoresheet.

Then, on the stroke of half-time and having absorbed 21 phases inside our own 22, Ulster were able to crash over from close range to put them 7-0 up at the break.

In the second half, both teams started well and there was a lot of good rugby on show, yet we were still struggling to make significant inroads inside the Ulster 22.

This was until David Douglas Bridge got his hands on the ball. After several good phases, Ollie Fox noticed a small gap around the ruck. The scrum-half sniped and managed to offload. Quick ball meant that the hosts were constantly retreating and this allowed Bridge to pick up at the breakdown, power forward and stretch every inch of his 6”5’ frame as he grounded the ball on the line. The conversion just sailed wide and it was a two-point game.

Not content with just one score, we were also able to grab the next! A great build up play in the midfield saw us swing the ball from left to right which eventually saw space created on the wing. Dan Lancaster found Epi Rokodrava who managed to offload to release Joaquin Gali. The Spanish U20 international tip-toed down the touchline before passing inside to Fox. The scrum-half was clearly tackled early and before he had caught the ball, but instead of complaining, he was able to pop the ball up to Geordie Gwynn who dived over in the corner. Lancaster impressively converted making it 7-12.

Ulster were able to hit straight back however as they rolling maul powered over as they edged back in front.

With seven minutes to go, we were able to force Ulster to carry the ball back over their try line following a strong kick chase. The subsequent five metre scrum saw us win another penalty and captain Lancaster opted to go for the sticks to put us 14-15 ahead. However, we were unable to reclaim and exit from the kick-off, and Ulster were able to capitalise as they scored in the corner.

Despite our best efforts, Ulster were able to close out the game 19-15. Despite the loss, Head Coach at Trailfinders Rugby Academy Paddy Gill was pleased with the performance and felt it showed the strength of the programme at Brunel University.

We would like to thank Ulster for hosting us in this friendly fixture and we will be hosting Ulster A in a similar match on Friday 6th January at Trailfinders Sports Club.