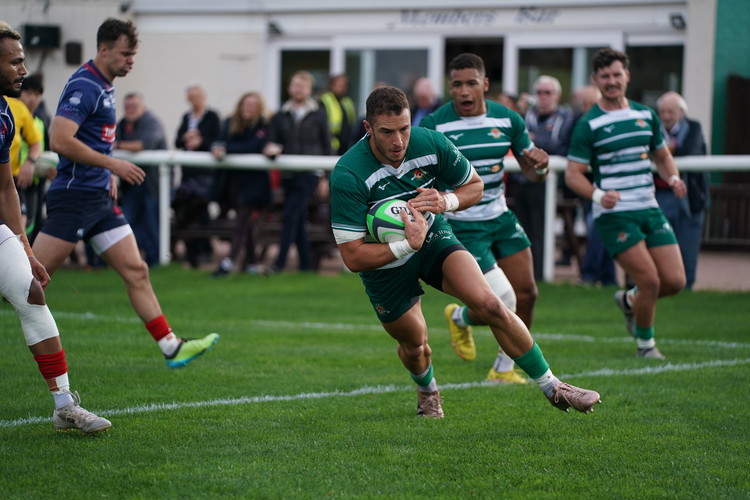 Ealing Trailfinders overcame a much improved London Scottish side at the Athletic Ground to secure a 21-57 win and maintain their unbeaten start to the 2022/23 season.

The game got off to an almost perfect start, with Ealing scoring after just two minutes. London Scottish were penalised for being offside at the kick which allowed Craig Willis to go to the corner. From ten metres out, Shaun Malton looked like he was going over for the first score but the maul was pulled down illegally and so referee Luke Rogan ran under the sticks to award the penalty try.

London Scottish answered back shortly after through Jordan Els after winning repeated penalties and it was level after nine minutes.

This didn’t phase Ealing however, as they quickly responded through Steven Shingler who scored in the corner after a well worked passage of play.

Ten minutes later Trailfinders were in again, after repeated penalties, Carlo Tizzano crashed over on the back of a rolling maul and Craig Willis did superbly well to add the extras from the touchline.

The hosts then added their second score of the day after capitalising from a quick tap penalty allowing Cam King to dot down.

With half-time beckoning Ealing secured the four-try bonus point with Barney Maddison on the back of the rolling maul to give Trailfinders the 14-26 half-time lead.

In the same way that Ealing scored almost immediately in the first-half, Scottish did so in the second as Harlequins dual-registered winger Cassius Cleaves went over in the corner.

It took Ealing time to respond from the Exiles’ fast start, but they slowly built back into the half. With the bench coming on and making an impact, just before the hour mark, sustained pressure and repeated penalties finally paid as Rayn Smid crashed over.

Just minutes later the visitors were in again as Luke Daniels was on the end of potentially the score of the season. From inside Ealing’s own 22, Jordan Burns spotted a gap at the ruck and burst through it. He got up to the half-way line before being tackled and recycling well. Shingler then put out a beautiful two-man miss pass to release Luke Daniels to run in unopposed.

After seeing this superb free flowing play, the forwards decided to return to their bread and butter, the rolling maul. In the space of five minutes, Malton picked up a brace, both on the back of the maul as Trailfinders pulled away from the hosts.

With five minutes to go, a strong box-kick and chase saw us regain possession. Will Davis spotted a gap which he almost was able to get his 120kg frame through. However, he was eventually pulled down by the desperate Scottish defence but managed to pop an offload to the lethal Burns who ran in under the sticks.

With the full-time whistle approaching, Scottish went in search of their bonus point score, but Ealing’s defence stood firm to cement the 21-57 local derby win and register their sixth victory of the season.