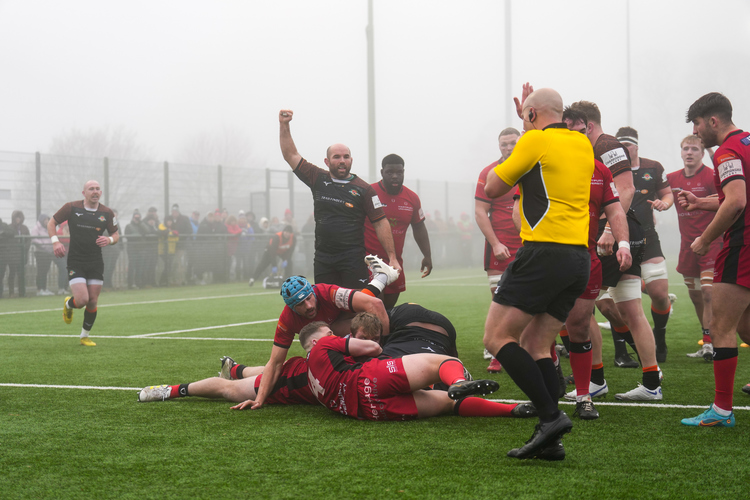 A Simon Uzokwe brace helped Ealing Trailfinders to a 13-26 bonus point victory away at Hartpury.

It was a match that very nearly didn’t happen, with the main pitch frozen over, but Hartpury were able to move the game over to the next door 4G pitch to ensure it still went ahead.

Despite this, the conditions were still difficult to deal with, given the freezing temperatures and heavy fog. But a penalty try in between Uzokwe’s brace and a late Carlo Tizzano score ensured Trailfinders left Hartpury with five points.

When the game finally did get underway, it did not take long for Trailfinders to go on the attack. Ben Ward's squad had several good opportunities in the first 10 minutes to get on the scoreboard, but lacked that killer edge to convert chances into points and Hartpury came out of the period unscathed.

Then on the quarter of an hour mark, Hartpury managed to score totally against the run of play. A simple missed tackle allowed Brad Denty to break clear, before the ball was popped inside to Matty Jones. The scrum-half ran in under the sticks and Tommy Mathews added the extras to make the score 7-0.

Despite this score, Trailfinders remained composed and built back into the game. The most effective way of doing this came via the scrum. It took 25 minutes for the visitors to get their first put-in, but from there Trailfinders didn’t look back, winning consistent scrum penalties for the rest of the afternoon.

From the first scrum penalty Ealing Trailfinders went to the corner and set up a rolling maul. Although it got disrupted, Trailfinders managed to recycle well and the ball found its way to Uzokwe who powered over from 10 metres out. Craig Willis added the conversion and the score was all tied up.

Hartpury added a penalty from Mathews to edge in front again, but Trailfinders answered straight back on the 35 minute mark. With a 10 metre line-out, Ealing Trailfinders set up a strong rolling maul that was moving forward at serious pace. With the try-line beckoning, Hartpury cynically entered from the side to pull it down and the referee was left with no choice but to award the penalty try and send the Hartpury player to the sin-bin.

Then on the stroke of half-time, Trailfinders were in again. Another dominant rolling maul crashed over with Uzokwe dotting down and Willis adding the conversion to make it 10-21 at the break.

With the hosts restored to a full compliment, they started the second-half the stronger of the two sides, attacking right from the outset and eventually settling for a penalty through Mathews on the 47 minute mark.

Although Hartpury would have liked to have kicked on from here, Trailfinders' defence stood firm throughout the second 40 and were able to limit the hosts to just three points. This was partly due to the scrum which got Trailfinders out of trouble on the five metre line on several occasions.

With 15 minutes to go, the scrum was able to help Ealing Trailfinders set up the bonus point score, winning the penalty that saw the visitors go to the corner. Here Trailfinders launched a fierce attack and after several patient phases, quick ball allowed replacement Tizzano to further his lead at the top of the Championship try-scoring charts.

With the bonus point secured Trailfinders were able to see out the rest of the game, securing an important 13-26 victory.

After the game, Director of Rugby Ben Ward said: “I’m really pleased with that result, Hartpury are the form team in the league as they’ve won their last five, so we’re delighted to come here and get the five points."