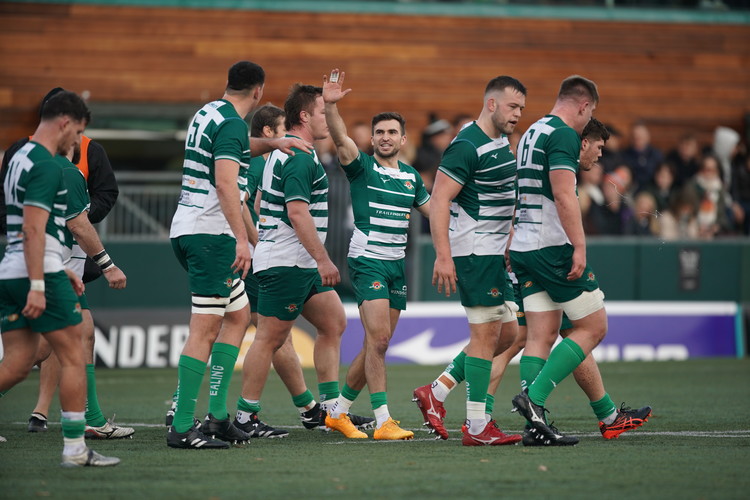 Ealing Trailfinders will spend Christmas at the top of the tree after being roared on to a big 43-22 win over Jersey Reds this afternoon.

Coming into the game it was a mouth-watering Christmas Eve match-up, as both sides were unbeaten in the league.

In-front of the biggest crowd of the season so far, the Trailfinders were able to put on a six-try spectacular, including a Craig Hampson brace, as they powered to victory.

After a great morning of build-up, with Christmas songs, snow machines and other festivities, the 1,500 strong crowd were ready to cheer on the two teams.

The atmosphere was palpable as the visitors kicked-off, but it was Ealing Trailfinders who were able to strike the first blow. A lovely free flowing move, eventually saw Luke Daniels released down the left wing. He was able to offload inside to Reuben Bird-Tulloch and despite being tackled, he was able to power over. Craig Willis impressively added the extras from out-wide and Ealing were 7-0 up after three minutes.

This lead didn’t last long, as Jersey responded back immediately scoring in the opposite corner to make it 7-5 after seven minutes.

After a frantic start, both sides were then able to ease into the game but the Trailfinders still remained on top.

This was until the quarter of an hour mark. Camped five metres out Trailfinders looked like they were about to crash over, but Jersey’s Brendan Owen picked off an intercept. The fullback raced clear and looked for all money like he was destined to score but Jonah Holmes was able to track him down before winning the penalty in what was the best defensive moment of the afternoon.

Five minutes later, the hosts made no mistake as Bird-Tulloch’s superb miss pass found Cian Kelleher who was able to power past the final two defenders to score in the corner.

The Jersey line-out had been a real strength this season, but as the game went on Danny Cutmore and David O’Connor begun to become a nuisance for the visitors. A big steal just before the half an hour mark paid off and within minutes, Trailfinders were down the end scoring through Hampson after a great Holmes break. This made the score 19-5 with just ten minutes until the break.

Jersey were determined to limit this margin however, as James Dun scored with four minutes to go and then on the half-time whistle, Russell Bennet’s penalty sailed wide to make it Ealing Trailfinders 19-12 Jersey Reds at the break.

In the second 40 it was the visitors came out of the blocks the fastest, but they were unable to score. This momentum well and truly shifted when, with their first attack of the half, Ealing built the phases before Hampson sold the most outrageous dummy from close range and was able to get over for his second score of the game.

This was followed by a Craig Willis penalty five minutes later to make it 29-12 with 20 minutes to go.

A Jersey try briefly made the gap 12 points, but then came the moment of the afternoon. Hampson again managed to snipe around the base of the ruck, and made a great break. On a hat trick, he executed the perfect 2-on-1 to selflessly put Ross Kane in under the sticks for his first ever try in professional rugby!

A quick score back from Jersey gave them a try bonus-point, but Trailfinders quickly responded through Willis who was bundled over by his teammates before converting his own score to make it Ealing Trailfinders 43-22 Jersey Reds.

The Bread Street Café Player of the Match was awarded to fullback Jonah Holmes.

Take advantage of our £10 ticket offer for our next home fixture against Ampthill on Saturday 14th January at Trailfinders Sports Club (KO 3pm). Click here to purchase tickets. To book our delicious pre-match hospitality email: hospitality@etprm.com.