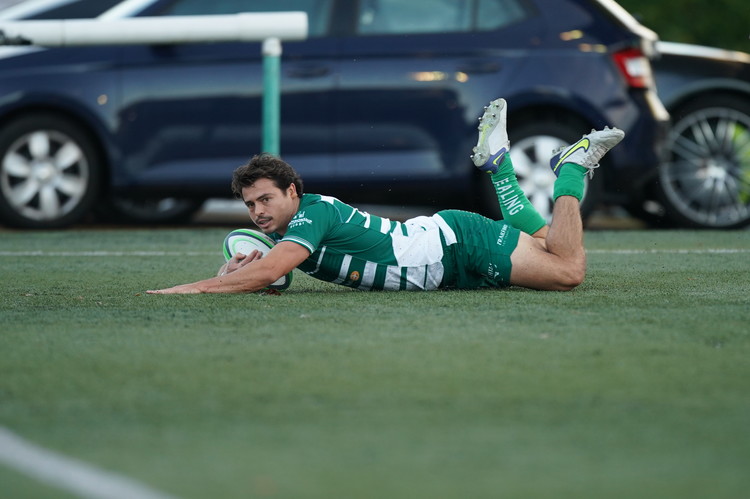 A strong display saw us get our defence of the Championship Cup off to the perfect start as we ran out 64-10 over Hartpury University.

A good first half performance helped us wrap up the bonus point inside the first 40, including Bread Street Player of the Match Jack Grant scoring one of the best tries we’ll score all season.

After the break Simon Uzokwe scored a second half hat trick as many players put their hands up for selection ahead of next weekend’s game in Nottingham.

After a slightly slower start, we managed to get the scoring started on the twelfth minute after repeated Hartpury penalties gave us both field position and momentum. Some good pressure looked like it had put Will Davis over, but the prop was judged to have knocked on before scoring. Fortunately we had penalty advantage, and after a quick tap penalty, Grant was able to tie in the defenders before offloading to Jack Metcalf who muscled over.

Just as the scoreboard has been updated, it had to be changed again as we scored our second immediately from the restart! Jack Digby made a superb break through the first line of defence before drawing the final man and offloading to Grant who was able to scuttle in for our second.

Our third try came through a powerful ten-man rolling maul with Digby popping up with the score but the best try of the day came just before half-time through our Aussie scrum-half!

With a minute left in the half, Grant collected a loose kick deep inside our half. He faked to kick initially, before side stepping the first man. He then beat another player, before dummying the final pass to run in under neath the posts. Lancaster converted to make the half-time score: Ealing Trailfinders 24-0 Hartpury University.

Unlike the first half, it only took five minutes for us to get on the score board in the second. Uzokwe scored a great solo try, firstly charging down the box kick, before regathering and then running over the last defender before dotting down!

Five minutes later he was in again! Some great offloading in the midfield from Metcalf and Grant almost set the scrum-half up for his hat trick, but with the try line beckoning, he unselfishly offloaded to Uzokwe.

It took only four minutes for us to score again as Dan Lancaster threaded through a sublime grubber kick to see Jack Metcalf grab his second in the corner.

After a few rocky weeks defensively, overall things were much better today but Hartpury were able to cross twice, both on the back of rolling mauls. George Denty got the first after the maul created an overlap while Will Tanner got their second five minutes later.

Despite this, we got back on track shortly after as Jordan Burns sniped around the edge of the ruck after good build up play between himself and Cam Terry.

Just as the scoreboard looked like it might be finished for the day, Cian Kelleher snapped up a loose Hartpury pass and kicked in behind. He got to the ball first and kicked ahead again, but just as it looked like he had just put too much on it, he somehow managed to dot the ball down just before it went dead.

With the clock in the red, Uzokwe managed to crash over to complete his hat trick and grab our tenth of the game.