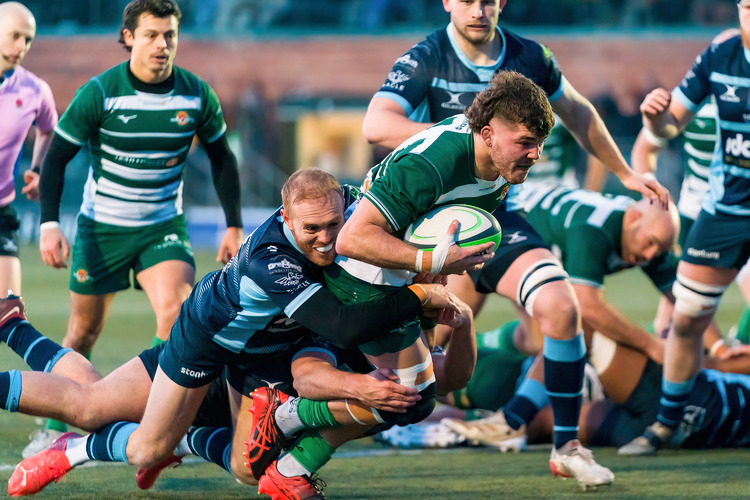 Braces from Carlo Tizzano and Shaun Malton helped Ealing Trailfinders continue their unbeaten run this season as they returned to the top of the Championship table after a 42-17 win over Bedford Blues.

It was a game that both sides took some time to build into, as the cold weather threatened to make handling difficult.

Bedford had deliberately picked four second-rows in their starting team in an attempt to try and stop the Ealing rolling maul which has been so effective so far this season, but on the tenth minute, the hosts muscled over with Malton dotting down to score the first try of the game.

After edging in front, the visitors managed to reclaim some momentum, and after knocking on the Ealing door for ten minutes or so, Grimoldby and Bedford took the points, to make it 7-3.

From that point until the half-time, it was all Ealing. A great passage of play that went from one touchline to the other eventually allowed Tizzano to power over from close range as the forward returned to the top of the Championship’s try-scoring charts just before the half hour.

Then five minutes later Ealing were in again. This time it was created through the boot of Craig Willis who found Malton on the end of his cross field kick. After plucking the ball out of the air, the hooker then dummied, broke down the wing before finding Howard on his inside to score Trailfinders’ third and make it 21-3 at the break.

After their disappointing first half, Bedford were quick out of the blocks in the second half as Matt Worley was on the end of a lovely backs move to get the Blues right back in the contest.

The hosts responded quickly however, first through Tizzano who scored after breaking off the back of a rolling maul, and then Malton was able to score a beauty of his own.

After a kick to the corner, Ealing faked the rolling maul and spun it wide. The hooker received the ball midway through a beautiful outside arch and despite being caught 5m from the line, was able to muscle his way over.

Bedford did respond through a good solo try from Jake Garside, but the final score of the game went to substitute Cam Terry, who managed to pounce on a loose ball near the Bedford try line and bundle his way over.

After his two scores and a strong all round performance, the Bread Street Cafe Player of the Match was awarded to Shaun Malton.

Tickets are selling fast for our Christmas Eve blockbuster against Jersey Reds at Trailfinders Sports Club (KO 12pm). Click here for tickets. To book our festive Christmas brunch (starts at 10:30am) email: hospitality@etprm.com.