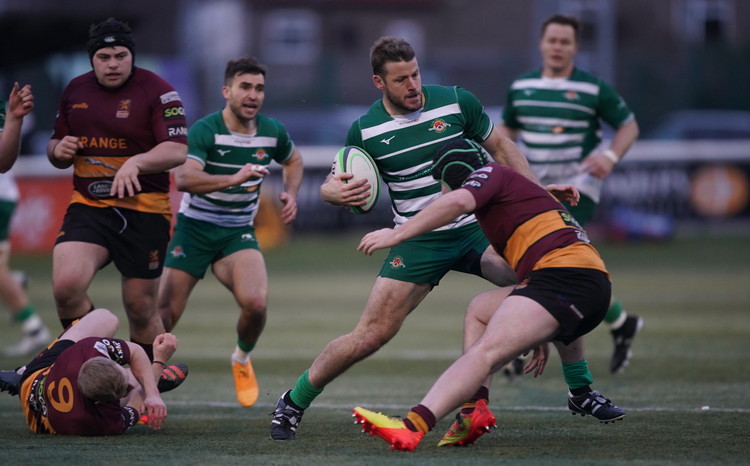 We got back to winning ways as we ran out 35-24 victors against a resilient Ampthill side at Trailfinders Sports Club this afternoon.

It was a game that we took a while to build into and credit has to go to the visitors for hanging in the fight and picking up a deserved try bonus point.

Amid some poor conditions, when the game got underway in West London, it took both teams some time to build into the encounter. It was on the ten minute mark that the deadlock was broken, as Ampthill's Morgan Strong went over on the back of a rolling maul.

This score looked to have woken us up as we went on the attack immediately from the kick-off, but despite five minutes of constant pressure inside their 22, we were not able to get over.

This didn’t last long however, and just after the 20 minute mark, Jonah Holmes dotted down after a beautifully delayed pass from Craig Willis to put him under the sticks. Willis added the extras and the game was tied up.

From the restart The Mob answered straight back. Kyle Whyte was sent to the bin for repeated penalties and then Strong got over for his and Ampthill’s second score.

The final 15 minutes of the half saw constant pressure as the Trailfinders were roared on by the vocal home crowd. Repeated penalties saw us camped on the Ampthill five metre line and with the half-time whistle beckoning, a powerful rolling maul was illegally stopped and the referee went straight under the posts to award a penalty try.

After a great half-time display from the Ealing Trailfinders Cheerleaders, we came out of the blocks fast in the second 40. Early impetus saw a great break from Pat Howard as he made 30 metres and beat several defenders. With Ampthill struggling for numbers defensively, Conor Rankin rushed out the line and was able to grab the intercept and run 80 metres to put the visitors back in front.

It was a lead that again didn’t last long as another great rolling maul was stopped just short and we were able to quickly recycle to the short side as Jan-Henning Campher burst through the tacklers to retake the lead.

The next score came 10 minutes later and it was from a lovely break finished off with a considerable amount of luck. After strong play, Carlo Tizzano was put through a hole on the half-way line and raced clear. The league’s top try-scorer was pulled down meters from the line and looked to offload to Craig Hampson. His pass hit the scrum-half directly in the face and the ball bobbled over the try line before Hampson dotted down. As the ball going forward off someone’s head isn’t a knock-on, the referee conferred with his assistant referee given the rare nature of this try, before awarding the score. Craig Willis slotted the extras to ensure his 100% success rate from the boot.

With the game ticking into the final 20, Ben Harris scored Ampthill bonus point try to make the margin only four points. This meant the final quarter of an hour could have been a very nervy affair, but the dominance of our replacement props helped keep us on top. A penalty at the scrum gave us field position and then repeated infringements and a deliberate knock-on eventually saw Ampthill down to 14.

With the man advantage, we chose to go to a scrum five metres out. The power shown pushed Ampthill back at a rate of knots and after they cynically infringed, the referee had no choice but to run under the posts for another penalty try.

With a few minutes on the clock we were able to close out a hard fought 35-24 victory.

The Bread Street Café Player of the Match was awarded to Carlo Tizzano.

Tickets are now on sale for our next home fixture against Coventry on Saturday 28th January at Trailfinders Sports Club (KO 3pm). Click here to purchase tickets. To book our delicious pre-match hospitality email: hospitality@etprm.com.