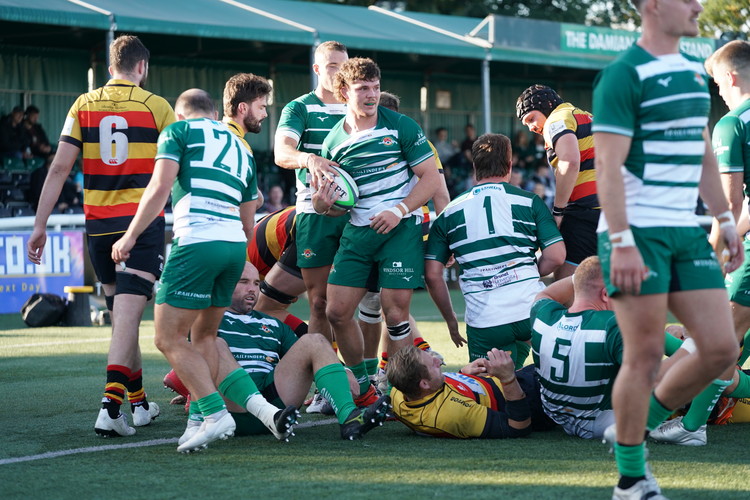 In what was a fairly error stricken encounter, both sides took their time to build into the game as poor handling seemed to halter any momentum that was building.

However, on the 12th minute, Ealing managed to get themselves on the scoreboard as Rayn Smid cut a beautiful line and ran home from 25 metres without a finger even being laid on him.

This score galvanised Trailfinders, and five minutes later they were in again. A strong rolling maul came up just short, but the forwards did well to recycle the ball. Strong ball carrying in the midfield managed to pull in all the defenders, before the ball then went wide and Luke Daniels dotted down in the corner.

Richmond answered back with a try of their own but Ealing were quick to score again soon after. A strong rolling maul almost made it to the line, but Craig Hampson spotted a small gap and sniped to grab their third of the afternoon. This made the half-time score: Ealing Trailfinders 21-7 Richmond.

As the second half got underway, there was one man who was determined to get his name on the scoreline. Ealing's top scorer, Carlo Tizzano came in with an absolutely superb finish in the corner to secure the bonus point, before grabbing another seven minutes later.

As the hour mark approached, Trailfinders managed to score two more tries in as many minutes. First, Bobby De Wee muscled over from close range, before Jordan Burns spotted a gap around the fringes and managed to skate in from 30 metres out.

The final 20 minutes of the game saw a few errors creep in to the game and Richmond were able to capitalise, with Paul Kiernan dotting down with five minutes to go.

Ealing were determined however not to let this be the final score of the game. Another penalty from the scrum, which was dominant all afternoon, saw them with a lineout inside the 22. The rolling maul started 20 metres out and quickly gained steam. Five metres out it was cynically pulled down by Richmond and the referee was immediately under the posts to award a penalty try.

With the clock in the red, Richmond were hunting for their bonus point try, but Ealing's defence stood firm and that was full-time.

Although it wasn’t necessarily a full 80 minute performance, another half century on the scoreboard for the second week running cannot be sniffed at.