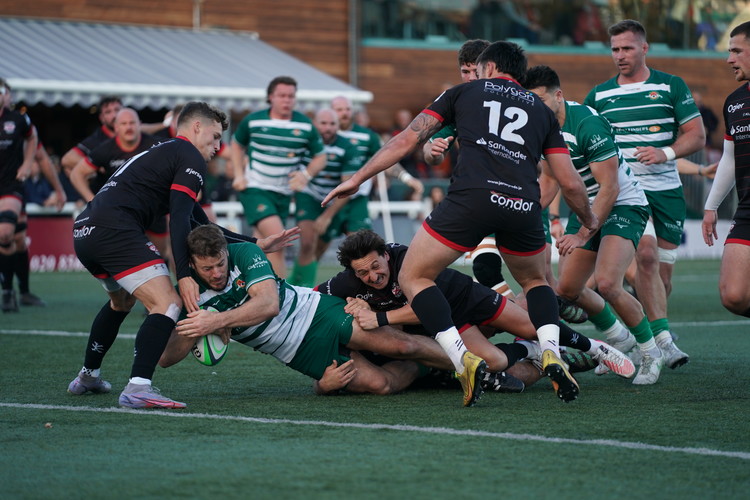 Two early second half scores were the difference as we defeated a high flying Jersey Reds team 22-13 at Trailfinders Sports Club in the Championship Cup.

A first half penalty try was quickly cancelled out by a James Scott score for the Reds, but two Russell Bennett penalties saw the visitors ahead at the break.

But after coming out of the blocks quickly in the second 40, Shaun Malton scored on the back of a maul before Pat Howard muscled over from close range to help ensure we made ten wins from ten this season.

Jersey came into the game high on confidence, having also won all of their games so far this season, and they took the lead early as Bennett slotted a penalty in front of the posts.

We answered back immediately however, after turning down a very kickable shot at goal and going to the corner. We set up a powerful rolling maul that would have crashed over, had it not been for the illegal intervention of Bennett. The referee agreed, and ran under the sticks to award a penalty try before sending Bennett to the bin.

Just as we edged in front, Jersey took the lead straight back as Scott scored after being on the end of a Jersey overlap.

Given the fast scoring nature of the game, it is not surprising it took only five more minutes for Craig Willis to slot a penalty to level things up 13-13 after a quarter of an hour.

Although there were no scores for the next 15 minutes, we came incredibly close on multiple occasions. In particular one beautiful, free flowing move between Rayn Smid, Carlo Tizzano and Craig Hampson saw us come agonisingly close but a tap tackle just denied us 5m from the line.

On the half hour mark, Bennett added another penalty to see the Reds retake the lead and despite both sides trying their upmost, neither could add anything extra and the half-time score was Ealing Trailfinders 10-13 Jersey Reds.

After a first 40 where Ben Ward said he thought Jersey “outworked us,” we came out at the start of the second half with a real point to prove. An early penalty saw us again turndown the points to go to the corner and it paid off again as Shaun Malton was bundled over on the back of a 13-man rolling maul.

Despite having just scored, we didn’t want to give Jersey the chance for a quick reply and so we kept up the tempo and we were rewarded for it. After working our way up the pitch, we were awarded a 5m scrum. Despite not having a run up, Pat Howard somehow managed to bundle over from close range, while taking three Jersey defenders over with him. With Willis adding the extras, the score was extended to see us with a 22-13 lead.

As the game continued, the match got more and more physical, with more and more big shots going in as tempers threatened to boil over.

Although Jersey may have been the better side in the final 20 minutes of the game, our defence and in particular our maul defence was superb as we continued to repel the Reds as we refused to allow our try line to be breached.

The final play of the game saw Jersey with a 5m line out and although the win was already confirmed, we refused to allow the visitors to get a score which would have given them a losing bonus point. Full-time score: Ealing Trailfinders 22-13 Jersey Reds.

Listen to the post-match thoughts of Ben Ward by clicking here.