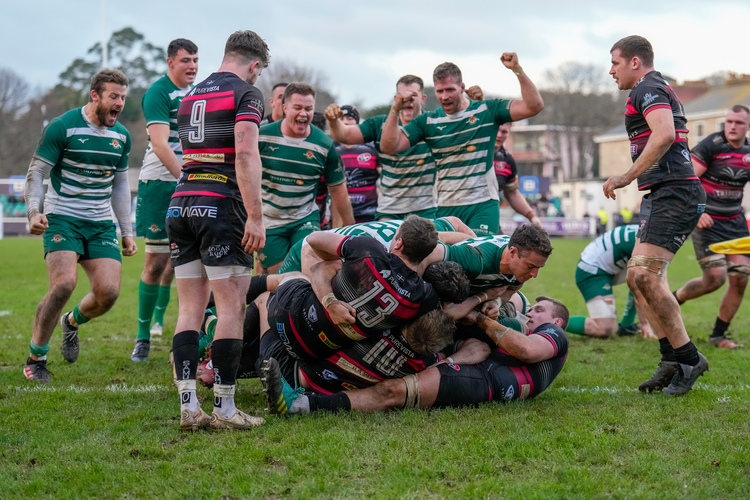 Ealing Trailfinders scored 25 unanswered points in the second half to secure a powerful 12-25 bonus point win over Cornish Pirates at The Mennaye.

In difficult conditions and battling against a vocal home crowd, Ealing experienced a tough opening 40 minutes.

David Johnston was substituted after just three minutes following a heavy collision and his replacement Steven Shingler (on for his 50th appearance) found himself in the sin-bin just ten minutes later. Pirates took full advantage of the extra man and early attacking momentum, crashing over for their first try in the 13th minute.

With the try unconverted, Trailfinders started to find their gear. The visitors worked their way into the Pirates half and built attacking pressure. However an injury to Cian Kelleher meant Jordan Burns was called upon to play the remainder of the match on the wing.

Ealing soon barged their way over the Pirates line from metres out but the hosts defence stood firm to hold the ball up. The visitors continued to throw everything at Pirates and were close to scoring, but a wayward short pass was intercepted and pounced upon. The Cornish centre ran 75 metres to score untouched under the posts. Pirates led 12-0 at half-time.

Heading into the second half, Ealing knew they had to score first to halt the Pirates momentum. That moment came in the 48th minute when Simon Uzokwe bulldozed his way over from close range. Craig Willis missed the conversion but Trailfinders were back in the contest.

Pirates soon found themselves down to 13 men after repeated infringements. Ealing took full advantage with Carlo Tizzano powering his way over. Willis added the extras and the scores were locked at 12-12.

With the clock ticking into the final ten minutes, Trailfinders won a penalty deep in Pirates territory. Willis stepped up and knocked over the penalty kick to give Ealing the 12-15 lead.

Pirates lost another player to the sin-bin in the 77th minute and Ealing pounced. First Willis delivered a beautiful cross-field kick to scrum-half turned winger Jordan Burns who crossed in the corner.

Then in the final seconds Ealing put together a swift attack in the Pirates 22. Willis broke through the Cornish defence popped a lovely offload to Jonah Holmes who then passed to a charging Jordan Burns who sliced through to score his second and secure a remarkable 12-25 bonus point win.

The comeback victory was Ealing's eighth Championship win of the season and a fitting tribute to Barney Maddison and Steven Shingler who both celebrated their 50th first-team appearance.