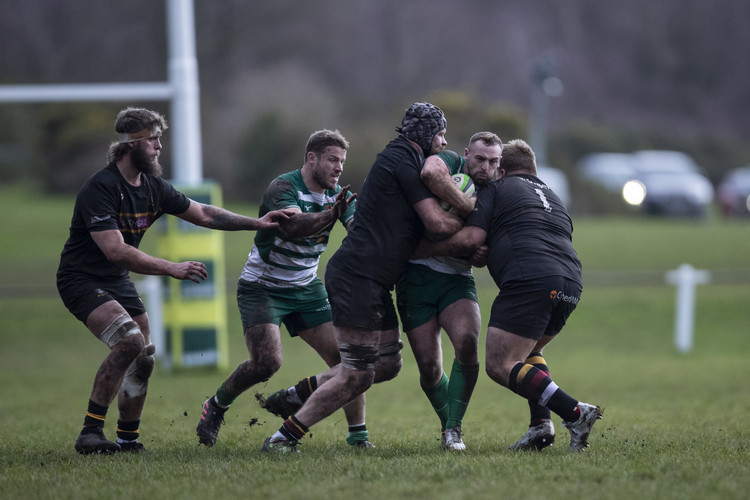 Ealing Trailfinders suffered their first defeat of the 2022/23 Championship season, going down 26-24 in a titanic battle at Paton Field.

In front of a big and vocal home crowd, Caldy crossed for their bonus point try in the final moment of the game to clinch an impressive victory and secure their third win of the season.

Ealing Trailfinders arrived at Paton Field confident and determined following their powerful 43-22 win over Jersey Reds on Christmas Eve, however on a tough, wet and slow pitch, the battle with Caldy was always going to be heated.

Up against a physical and large Caldy pack, the Trailfinders forwards hit the game with power, barging over the whitewash with a well executed driving maul in the 15th minute, Jan-Henning Campher the scorer. Craig Willis added his first kick of the afternoon and Ben Ward's side led 0-7.

The match took a pivotal turn seven minutes later with Ealing Trailfinders tight-head Ross Kane red carded for a dangerous tackle in the ruck. Kane's dismissal meant Trailfinders were down to 14 players for the next 58 minutes.

Needing to keep the scoreboard ticking over, Ealing Trailfinders were then awarded a penalty in front of the sticks. Willis stepped up and calmly slotted the penalty kick for the 0-10 lead.

With dark clouds forming over Paton Field, Trailfinders shot out of the blocks straight after the half-time break, with a swift wide pass to Reuben Bird-Tulloch who collected and ran in for an untouched try. Willis nailed the conversion and the visitors were 0-17 ahead.

The lead was only short lived with Caldy responding two minutes later, taking advantage of a loopy wide pass to intercept and cross for their first try. The conversion was successful and the score reduced to 7-17 with 35 minutes left to play.

Determined to remain on the front foot, Ealing Trailfinders hit back just three minutes later with their third try. Jan-Henning on the end of a powerful driving maul to score his second. Willis added the extras for the 7-24 lead.

Roared on by a boisterous home crowd, Caldy continued to throw everything at the Championship leaders. They worked their way into Trailfinders' 22 on a number of occasions, before taking full advantage of a dramatic final three minutes.

First Luke Daniels was yellow carded in the 77th minute, before fullback Jonah Holmes also found himself in the sin-bin two minutes later. With Ealing Trailfinders reduced to 12 players and with one final attempt at the line, Caldy swung the ball swiftly wide, using the overlap to score in the corner and secure a famous comeback win. The conversion was missed but the home supporters could not care less.

Take advantage of our £10 ticket offer for our next fixture against Ampthill on Saturday 14th January at Trailfinders Sports Club (KO 3pm). Click here to purchase tickets. To book our delicious pre-match hospitality email: hospitality@etprm.com.