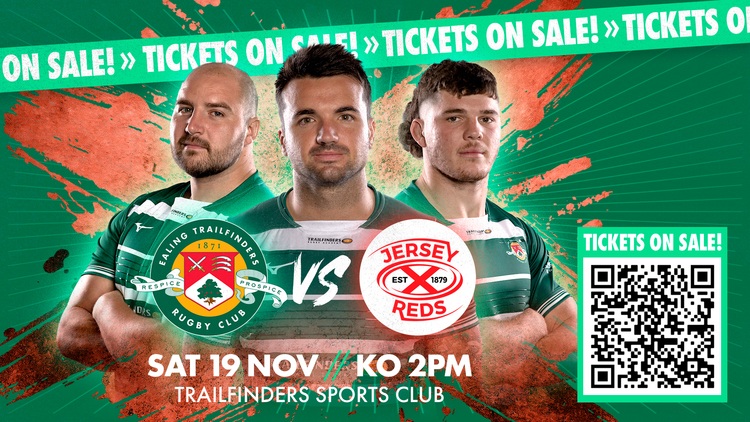 Make sure you're ready for this weekend's game between the two only unbeaten teams in the Championship!

Kick-off your day in style by joining us for our delicious pre-match hospitality. To book email: info@etprm.com or click here for further details.

The games in the Autumn Nations Series will be shown LIVE on the big screen in the clubhouse throughout the day.

Things start at 1pm as Wales take on Georgia, while England v New Zealand (5:30pm) will be shown post-match, so make sure you stick around after the full-time whistle to soak up the atmosphere and watch all the goings on at Twickenham.

PLAYER OF THE MATCH SPONSOR:

Head over to our shop trailer to purchase your Ealing Trailfinders 2022/23 replica shirt. The shirts will be on sale from 12:30pm and the shop remains open throughout the game and post-match.

Our free digital match programme will be published on the Friday before the game. The programme will be available on our website and social media channels. You can also scan the QR code posters at the ground to read for free.

Last season was a very tight campaign for Jersey as they finished 4th in the Championship, 11, 8 and 4 points behind ourselves (1st), Doncaster Knights (2nd) and Cornish Pirates (3rd) respectively. Although they have always been a strong side, the Reds were prone to the odd slip up, especially away from home, last year as they fell to seven defeats in the league last season.

This campaign however has been very different. Jersey have come out of the blocks firing and have nine wins from nine matches this season, a record which is only matched by ourselves! Such is the dominance of the two teams that we are both already two wins ahead of third placed Coventry in the league and both on maximum points in Championship Cup Pool 1.

The Reds 100% start to the season has seen them put in some dominant performances, as well as winning some tight encounters. Early games against Ampthill, Coventry and London Scottish were all won relatively comfortably, but their first challenge came at the end of September as they welcomed Cornish Pirates to the Stade Santander International. It was an incredibly tight affair but eventually the hosts came out with a 21-10 victory.

A strong win against Caldy helped to put the Reds back on track but next came their toughest test so far. Doncaster Knights travelled to the island on a windy Friday night and almost claimed a result. With a minute left on the clock, Jersey were 19-12 in front but Doncaster managed to bundle over from close range. This left the Knights with a kick to draw the game, but the ball sailed just wide and the Reds kept their perfect record intact.

November saw the start of the Championship Cup and with it came two strong performances against Nottingham and Hartpury. This weekend will see someone’s perfect record come to an end and it is a game not to be missed!

In early February we travelled over to Jersey for our league fixture midway through Storm Eunice. In what was understandably awful conditions, we had all the momentum in the first half and raced out to a 6-0 lead. A physical try from Roy Godfrey was almost countered by a third Craig Willis penalty, but then on the stroke of half-time a Jordon Holgate intercept score saw Jersey go in in front, leading 10-9.

Despite being behind, we remained calm in the second 40. An early Willis penalty was followed by a big rolling maul which allowed Jan-Henning Campher to crash over and make the scores 10-19. After absorbing a lot of pressure, a final late Craig Willis penalty all but secured the win, as we left Jersey, 10-22 winners.

HOW TO FIND US:

From the A40 take the B452 turn-off towards Ealing (actually signposted as Perivale) along the Argyle Road. Pass through a set of traffic lights and across a roundabout. At the second roundabout, (about 0.5km) turn right into Vallis Way. Trailfinders Sports Club entrance is at the end of the road. Click here to view map.

Car parking is available at the ground and costs £5 per vehicle. You can purchase your parking ticket at the gate via card or cash.

You can take a national rail train from Paddington to Ealing Broadway and then hop on a bus (see below). Click here for the latest National Rail updates.

Many buses stop in the vicinity of Trailfinders Sports Club, including the 297, E1, E2, E7, E9 and E10. The nearest bus stop to the ground is 'Scotch Common', which is a five minute walk to the club.

For further information or assistance please email us on: info@etprm.com.

WE HOPE YOU ENJOY YOUR MATCH-DAY AT EALING TRAILFINDERS!