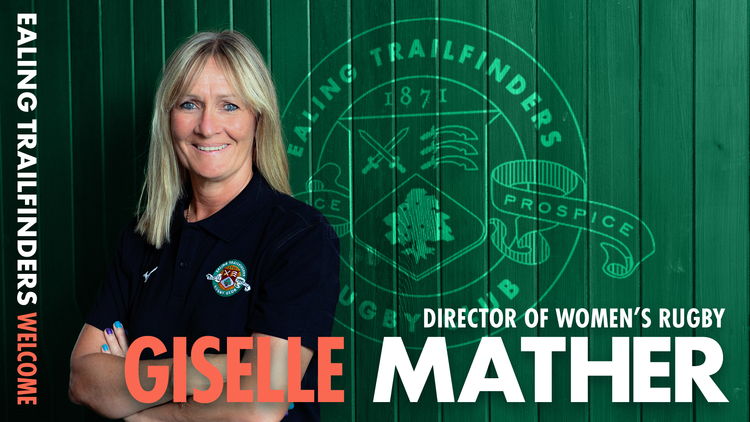 Ealing Trailfinders are thrilled to announce that Giselle Mather has joined the club as Director of Women’s Rugby.

Giselle joins from Premier 15s side Wasps Women, where she has been Director of Rugby on two separate occasions. Her first spell from 2001 to 2004, was hugely successful as she won back-to-back Premiership titles in 2003 and 2004. In 2016, she returned to the club and helped guide them through the transition of the league from the Women’s Premiership to the Premier 15s, before going on to achieve playoff finishes in three out of five seasons.

In between her time at Wasps, she joined London Irish and spent a decade with the Exiles working with their Elite Player Development Groups. Seven of those 10 years were spent heading up the club’s AASE programme (Advanced Apprenticeship and Sporting Excellence), at a time when Alex Corbisiero, Joe Cokanasiga, Jonathan Joseph, Tom Homer and Marcus and Anthony Watson were making their way through the club’s junior ranks.

Giselle also broke through the glass ceiling as she became the first woman to earn her level 4 coaching badge and the first woman to lead a men’s side on a 62-game unbeaten run which included three promotions and two Twickenham Cup Final victories while she was in charge at Teddington RFC.

Giselle’s playing career is arguably even more impressive than her coaching one. She was one of the first Red Roses, with cap number 35 and won the World Cup in 1994 and the 5 Nations Grand Slam in 1995 and 1996.

On discussing her move to the club, Giselle said, “It’s great to be joining Ealing Trailfinders as Director of Women’s Rugby. The women’s game at the moment is in a fantastic space and the club’s commitment to it is immense and so the opportunity to lead this programme is really exciting.

“The partnerships and pathways that the club already has with Brunel University, Henley College and Places of Development (POD) feeder clubs are so important for women’s rugby moving forward and Ealing are already way ahead of the game on that one.”

Simon Sinclair, Chief Operating Officer of Trailfinders Rugby Academy and Women’s Programme, said, “It’s hugely exciting to be bringing someone of Giselle’s calibre and experience to our club. She has achieved so much within the game both as a player and a coach and ever since I first met her, her energy and enthusiasm for what we are trying to build and our ambition to play in the Premier 15s was noticeable.”

Ben Ward, Ealing Trailfinders Managing Director said, “We’re a club that is always looking to bring good individuals into our environment and there is no one better than Giselle. We have aspirations to be in the Premier 15s and we want to create unique, strong pathways to develop young English talent. From my conversations with Giselle, she shares our aspirations to make every area of the club the very best and I’m looking forward to working with her.”