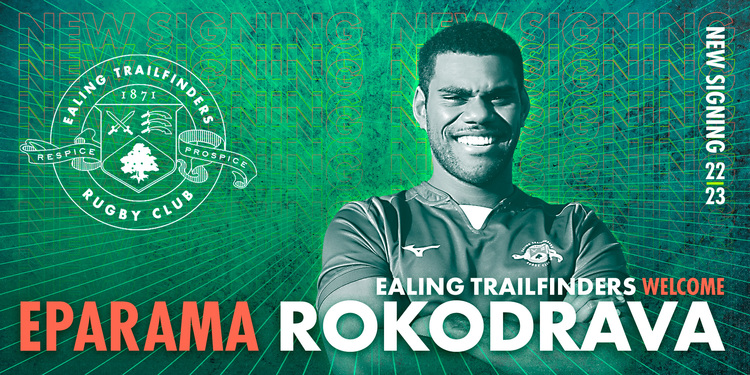 Ealing Trailfinders are delighted to announce the signing of exciting winger Eparama Rokodrava on a long-term deal.

Eparama was part way though his first season with Wasps but has now made the move over to Trailfinders and has already begun training with the squad.

Despite being only 18 years of age, Eparama weighs in at 114kg and is 1.87m tall. He came through the rugby programme at the City of Oxford College and has represented England U18 and was part of an England U20 training camp earlier this year.

Despite still being relatively new to pro-rugby, Eparama is a very exciting young talent. His skill set is superb, with an incredible offloading game, pace to burn and an impressive level of physicality, everyone at the club is excited to see him run out in green and white.

When speaking about his move to Ealing, Eparama said: “I’m thrilled to have joined Ealing at such an exciting time for the club.

“From all the discussions that I’ve had with everyone here, I’ve been really impressed by the ambition of the club, especially as it matches my own and I’m eager to get started.”

Director of Rugby Ben Ward said: “We’re really pleased to have secured the signing of one of the most exciting prospects in English rugby.

“Some of the attributes and the skillset he poses can’t be taught, and although he’s not the finished article just yet, we’re really excited to see how he progresses in the future.”