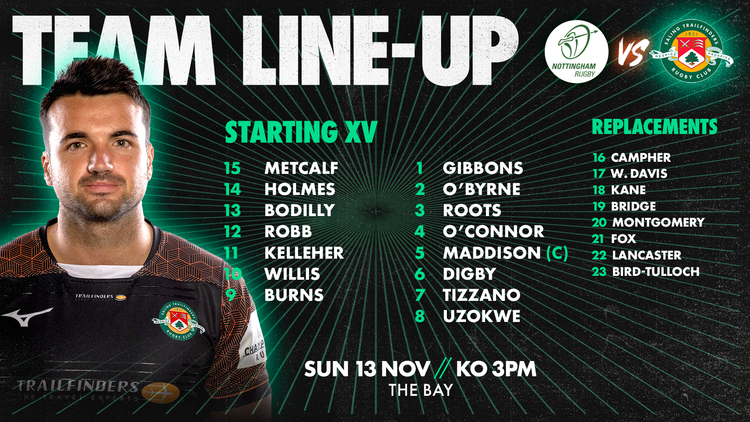 Ealing Trailfinders have named another strong side to face Nottingham in the second round of the Championship Cup.

Up front, Kevin O’Byrne continues at hooker after his impressive debut last weekend and will pack down alongside James Gibbons and Jimmy Roots.

There will be lots of experience in the second row, as last week’s skipper David O’Connor, will partner this week’s captain, Barney Maddison.

In the back row, last week’s hat trick hero Simon Uzokwe starts at number 8, with Jack Digby on the blindside and Carlo Tizzano on the openside flank.

There is a change at halfback with Jordan Burns partnering Craig Willis, while the midfield is unchanged with Peter Robb and Max Bodilly at 12 and 13 respectively.

There is one change in the back three, with October’s Championship Player of the Month Jonah Holmes, coming in to replace Luke Daniels. Holmes will partner Jack Metcalf and Cian Kelleher.

Among the replacements, Jan-Henning Campher makes a return to the matchday 23, while David Douglas Bridge is in line to make his debut from the bench.

Tickets for Sunday's clash at The Bay are still available here.