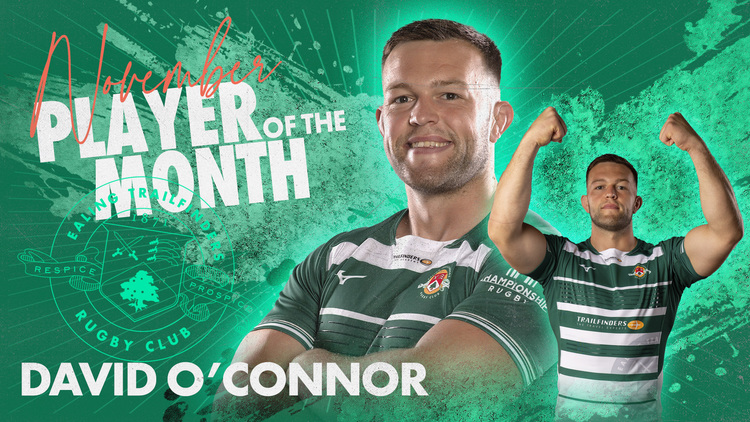 After a strong November, David O'Connor has been named as the Ealing Trailfinders Player of the Month.

Starting all three of our games in November, the second-row has been a key part of our successful start to the defence of our Championship Cup title, as we currently sit top of Pool 1 after three wins from three.

In our opening game in the competition against Hartpury, David captained the side and was influential in making the set-piece, and in particular the line-out, a real weapon for us as we ran out 64-10 victors.

Then he partnered Barney Maddison in Round 2 of the Cup as we travelled to Nottingham and claimed a hard-fought victory at the Bay.

He was then influential in our final game of the month, as we faced fellow unbeaten side Jersey Reds. In what was the toughest game of our season so far, David was vital in the dominance of the rolling maul which helped claim our first try in the 22-13 victory.

Your next chance to see David and the boys play in a game at Trailfinders Sports Club will this weekend as we face Bedford Blues on Saturday at 3pm or on Christmas Eve when we play Jersey Reds at 12pm. You can buy tickets for either of these games, by clicking here.